Note, due to the new phenomenon of MUXICAL chairs you may experience problems with certain MUXES disappearing. First try rescanning your TV / set top box, do it manually if possible. If this fails to sort it check on transmitter work or call the reception advice phone numbers.
Also see basic digital fault finding,
and the wrong aerial for Rowridge

Rowridge transmitter began VHF TV transmissions in 1954 although this was from a shorter temporary tower, the (taller) stayed mast of 150m was constructed in 1956 (how high is high ?). UHF broadcasting started in 1966 for BBC2, BBC1 and ITV were added in 1969. In order to accommodate all the additional transmitters required for the digital switchover etc a second mast (187m high) was put up in 2010 because the older structure was not deemed strong enough to carry all the new digital transmission antennas. The two masts existed together until 2015, the original mast being dismantled in the summer of the latter year. The transmitter is situated 3 miles SW of Newport on the Isle of Wight, that’s about 15 miles South of Southampton.

Rowridge transmitters population coverage is around 1.75 million and its broadcasts can be picked up in many areas along the South Coast including Portsmouth, Southampton, Bournemouth, Fareham and Weymouth. 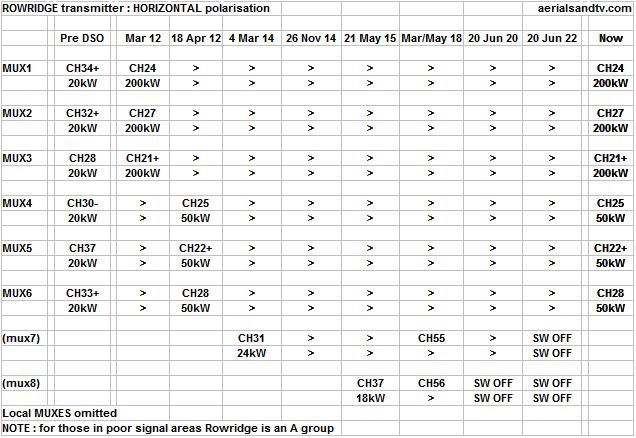 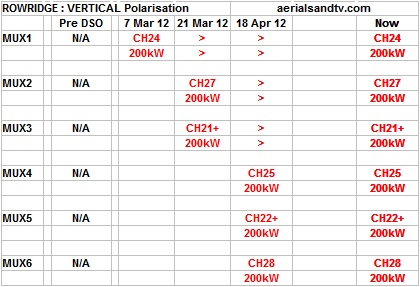 Rowridge is an A group transmitter
There is a "Local" MUX on CH37 (horizontal polarity)
Rowridge transmits all its digital output in both horizontal and vertical polarity. Rowridge is the only main transmitter to do this (the other dual polarity transmitters are all relays) and it is to help alleviate co-channel interference with the continent. If you get interference with a horizontally polarised aerial you have the option to go vertical which should decrease the co-channel. Whether HP or VP is preferable will depend very much on where you live. Some sources recommend vertical polarity for all installs though I’m not sure I do, remember that polar plots of aerials are tighter when they’re horizontally polarised. Personally, assuming you have relatively easy access to the aerial, I’d try horizontal first then vertical if you’re having problems. Having said that if you receive your signals from Rowridge over a significant body of sea water and suffer from “tide fade” , or you have had co-channel issues in the past, you may be better off trying vertical polarity first.
All 6 MUXES are transmitted at 200kW on vertical, but on horizontal only the first 3 (the PSBs) are at this power, MUXES 4 to 6 are "only" 50kW (this is to avoid co-channel on these 3 MUXES with Crystal Palace), though this is still pretty high power, remember that they were transmitted at 20kW pre DSO !

Rowridge is a very powerful transmitter, in fact it is the joint most powerful in the country for its vertically polarised output (4th most powerful for its horizontal output). In addition it has just over thirty smaller repeaters to increase its signal coverage. Ofcom report that, unsurprisingly, Rowridge doesn’t transmit to the South !

Those situated to the North or NW of Rowridge may find that during certain weather condition they can suffer from co-channel interference as their aerials are pointing towards the continent.

See this customer aerial report, and the wrong aerial for Rowridge. 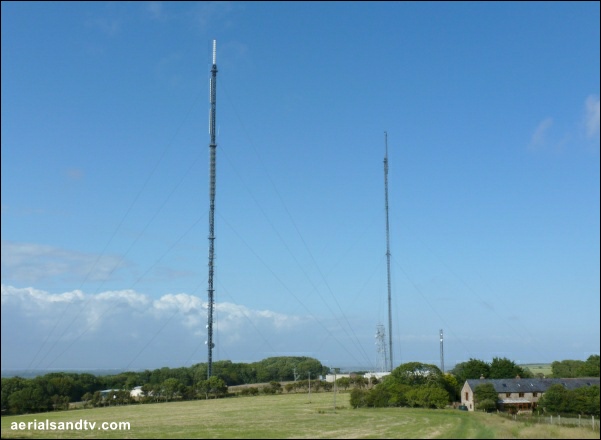 Pictures of Rowridge taken in July 2015 during operations to dismantle the older mast. The latter is on the right and had been up since 1956. The newer left hand mast was constructed in 2010. NOTE there is only one mast on that site now, though Chillerton Down radio mast isn’t that far away so from some angles (and a fair way away) it may look like there are still two !

The close up on the left of the flying jib arrangement used to dismantle (and also, in fact, to construct) masts. See an excellent article on mast construction on the MB21 site. 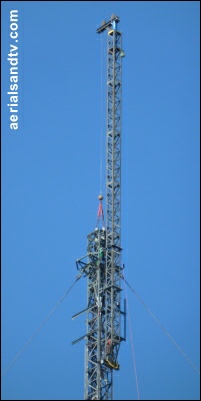 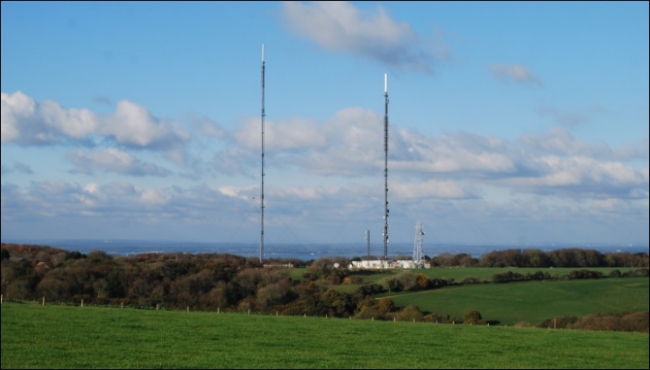 An exceptional picture of Rowridge (when there were temporarily two masts) by David Foord at The Big Tower. Note the mainland just visible behind the base of the mast(s).

These are the wrong aerials for Rowridge

Wrong aerials for Rowridge, but also any other A group transmitter : see Rowridge graph.

Both these aerials were spotted in Purley On Thames, just west of Reading, and they’re both on Crystal Palace transmitter but this article is just as relevant to Rowridge (or any A group transmitter). The thing is, theses are the wrong aerials for Crystal Palace, or any A group transmitter come to that. I’m not familiar with the signal strength in this location (though the one on the left was on a bleedin’ high pole....) but whether it’s a strong or weak area the installer has still fitted the wrong aerial.
Why ?
Well if it’s a weak reception area an A group aerial should have been used.
On the other hand if it’s a strong or medium reception area he should have fitted a Log Periodic aerial or a Yagi10K.
Let’s assume it’s a weak area. I estimate that over the Crystal Palace frequencies the aerial on the left would average about 1.5dB more than a DM Log and the one on the right about 2.0dB more. But if you’re short of signal a Yagi18A would give about 4.7dB more, and an XB16A about 6.5dB more. We had a customer who was shielded from Crystal Palace transmitter by the Arsenal football stadium. He originally had a DAT75 (a large wideband Tri boom aerial) but his pictures were very poor, so he swapped to an XB16A and reported that whilst his signal wasn’t perfect it was much better, “we can actually watch TV now” was his exact comment !  QED #1 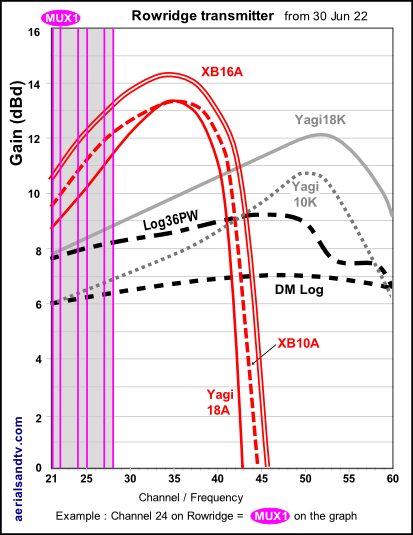 This channel allocation guide for Rowridge (horizontal polarity) also includes the same information for other potentially co-receivable TXs within the Rowridge coverage area, namely Midhurst, Heathfield, Crystal Palace, Whitehawk Hill (Brighton), Guildford, Hannington, Mendip, Oxford, Salisbury, Stockland Hill and Beacon Hill. The channel allocation guides can be very useful in the diagnosis of co-channel interference problems and can also be invaluable if you are trying to find a spare channel for a modulated output (e.g. for a Sky box or CCTV system) to be added to your TV setup/distribution system without suffering from co-channel.
Also check Rowridge’s thirty four smaller relays and the French Transmitters.
The frequencies given are for (most) digital MUXES, for analogue channels deduct 3MHz.

It is not unknown for those on Rowridge to suffer co-channel interference from the continent particularly during periods of high pressure (this was the reason that the transmitter was made dual polarity at switchover). If you live to the north or NW of the transmitter your aerial is also pointing at France ! See how to combat co-channel interference. 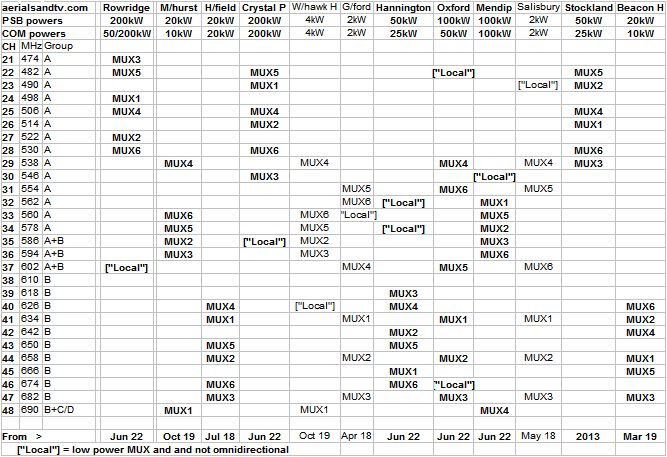