700MHz clearance occurred at Oughtibridge on the 5th Feb 2020. The bad news, and this applies to many other C/D group repeaters, is it moved from a C/D group (CHs 50, 55 & 59) to an A group (CHs 23, 26 & 30). Basically there’s a good chance that those with original C/D group aerials may have problems, particularly if they are in a poor signal area (see Oughtibridge transmitter graph before and after the 700MHz clearance).

Subject list :
- Oughtibridge transmitter : low power digital transmissions, or not ?
- What is a repeater (or relay) Transmitter ?

Oughtibridge television transmitter was opened in 1980 and broadcasts into the Upper Don valley and used the C/D group until Feb  2020 when it became an A group. It is necessary due to Emley, Belmont and Crosspool transmitter’s being hidden by the hills. Oughtibridge transmitter a relay of Emley Moor and is a vertically polarised TX of 8W. Now 8W isn’t that much, and sounds even less in comparison to a main transmitter, or even the 39W it used when it broadcast analogue, but, for Oughtibridge, in a way, it was a power increase (see below) !
Eight Watts might not sound much, but even for analogue this article (see "Low power TV transposers" graphic on that linked page) suggests that a 1W signal in the A group - though A group signals do travel a bit further - would have a range of about 2 miles with a fairly low gain (10dB) receive aerial. The article suggests the range could still be OK at 20 miles if the receive aerial was higher gain and had a mast head amp. For digital the range would be further (again, see article below)

How can a power decrease be a power increase ? ! ?
Well at our test site, which is directly across from Oughtibridge transmitter, a DM log used to average 60dBµV, for analogue. The figure would vary from day to day, but not by that much. For digital the DM log gives about 54dBµV.
But.......
The recommended signal level for analogue reception is/was 60 to 80 dBµV, so the received signal was at the bottom of the range.
However, for digital the recommended signal range is 45 to 60 dBµV, so the received signal is now at the top of the range.

So, in a manner of speaking, we get a signal increase for a transmission power decrease.......
The same applies to the main transmitters. From the test site Emley’s 870kW on analogue gave an average of 87dBµV, but now, with digital transmitted at 174kW, a DM log gives about 81dBµV. Before, the received analogue signal was 7dBµV over the recommended level, but now the lower power digital signals are 21dBµV over recommended !
Why is this ? See digital to analogue transmission power equivalence.
Also note the power decrease to dBµV readings. For a signal power level approximately one fifth we get a signal drop of 6dB.

As with most of the smaller relays only MUXES 1 to 3 (the PSBs) are transmitted from Oughtibridge, not all six digital MUXES. 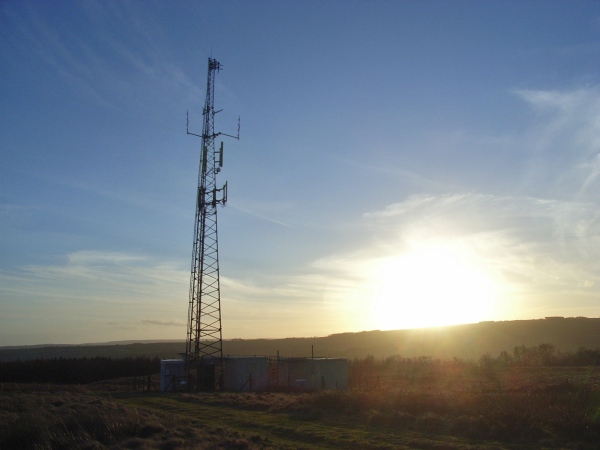 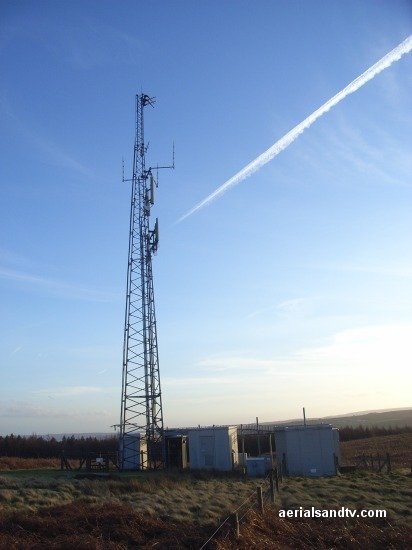 Close up of a repeater transmitter’s aerial array, this is Oughtibridge and it is a good example of a smaller repeater.

A repeater (or relay) is a transmitter which receives a signal from a main TV transmitter, remodulates it onto a different set of frequencies and then rebroadcasts it again. They are used to transmit into areas which are unable to receive good signals from the main transmitter, this picture of Millhouse Green repeater shows this very clearly. Most (but not all.....) repeaters only broadcast to a relatively small number of people. In the case of Oughtibridge the repeater retransmits into the low lying areas of the Upper Don valley around Wharncliffe and Oughtibridge, hence the name. The signal is received from Emley Moor (situated to the NW) using the log periodic at the bottom of the accompanying picture, then it is rebroadcast via the Log array at the top of the mast into the valley to the South and West.

There are about 1100 repeaters  - excluding "self help" transmitters - in the UK (they are listed here, downloads an Excel file), of which 30 are larger repeaters which are actually used by quite large numbers of people*, thus they transmit all 6 digital MUXES. In addition, during the 700MHz switchover (2018 to 2020), another 12 repeater transmitters became 6 MUX. Unfortunately all the other relays, the great majority of them, only transmit three (PSB) MUXES, i.e. not all six of them.

The original plan was for another 200 of the largest repeater transmitters (in terms of population coverage) to broadcast all 6 MUXES, but the commercial broadcasters declined to pay for it ! However, the 3 PSB MUXES will still give all the five channels which were originally transmitted on analogue, plus a load of others, plus numerous HDTV channels.

Just to hammer the point home, to get all 6 digital MUXES you need to get onto one of the 92 six MUX transmitters, though this has become much easier after the post switchover power increase.

Note. Many repeaters have restricted radiation patterns (see below for that of Oughtibridge) and most are relatively low powered.

* Rather surprisingly, some repeater transmitter (e.g. Sheffield), actually transmit to significantly larger numbers of people than some of the main transmitters !

Graphic showing the use of a repeater / relay transmitter to improve coverage in a valley which lacks the all important “line of sight” from the main transmitter. 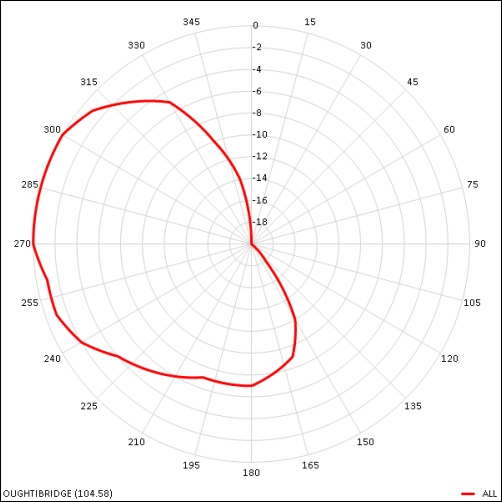 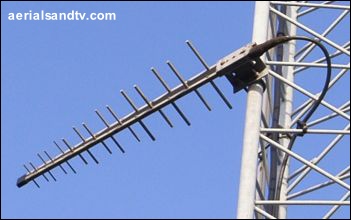 Close up of the receiving Log Periodic aerial at Somersham repeater transmitter.

These aerials are of BBC design but manufactured by Chelton electronics. They are 48" long by 13" wide, with 30 elements and a gain of 7 to 8dBd. These must be the most ruggedly constructed aerials around and are generally used for broadcasting but also by the military. And they should be well made, because they weigh nearly 3kg, and cost over £500 each ! ? ! Details N Savin 2009. [Link] 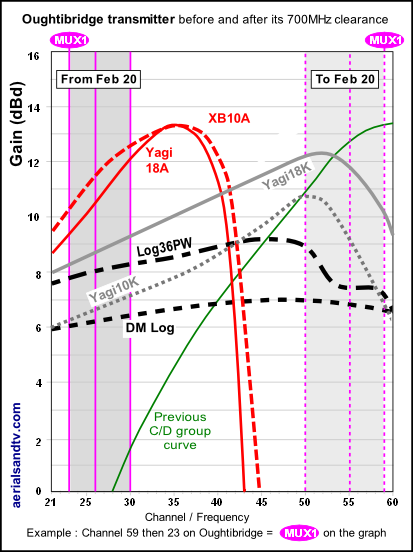 This graph [link] illustrates clearly how, post 700MHz clearance (occurred at Oughtibridge in Feb 2020), some aerials, mainly C/Ds may struggle to pull in an adequate signal. The good news is that swapping to an A group aerial will actually put you in a better position than you were before (i.e. than a C/D or wideband on a C/D transmitter). This is because, watt for watt (transmitted power), A group signals [being a lower frequency] travel further more efficiently than C/D signals. That’s provided you have an aerial tuned to pick them up at peak efficiency, i.e. an A group aerial !