Carriage charges. Unfortunately we cannot ship this product out of the UK.

The Log 36 (pre wired) is a suitable aerial in medium signal areas for any transmitter (but also see Yagi 18K).

There is more than one model of Log36 on the market, and I have tested at least one other.
Unfortunately they don’t work as well…..

The aerial come with a clamp for poles up to 2in.

NOTE 1: we strongly recommend that all Log periodic aerials (outside installs) are tilted up slightly at the front.

NOTE 2: The version sold from Jun 18 on, is, unfortunately, pre-wired. In order to improve the waterproofing of the F conn joint we supply 1ft of self amalg tape.

The Log36 is supposedly tuned to help reduce interference from the mobile phone signals transmitted just above the TV band since 2013 (though it must be said a filter is generally the most effective way to combat that problem). Log36s are only available in T group / wideband.
See wiring up a Log36.
We recommend that for outside installs all Log Periodic aerials tilted up at the front end.

The performance and dimensions of the antenna can be found on the relevant tables below. 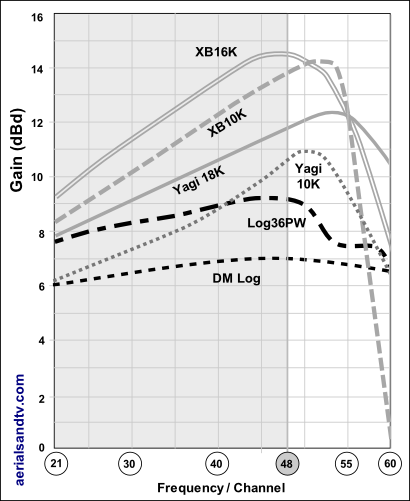 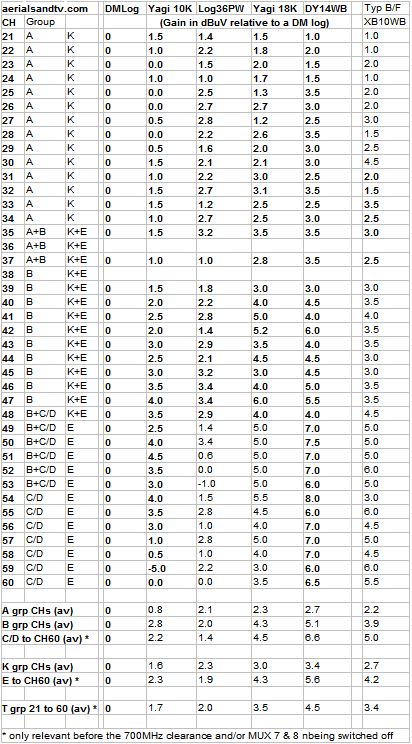 If there is such a thing as a “universal aerial” (which there isn't, but bear with me) this is it, also see Yagi 18K.

In most cases you can’t go far wrong with a Log 36 (or a Yagi 18K), especially if you need a wideband aerial. It is particularly suitable for Digital (i.e. Freeview transmissions) and is relatively short which is preferable for loft installations.

If you're still short of gain then try adding a variable gain(capable of being turned down to a low level) mast head amp. Also see DY14WB.