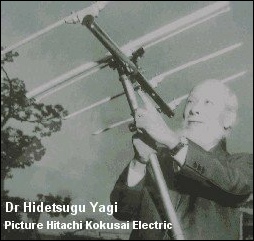 Ever since Dr Yagi patented his eponymous aerial in 1926 people have been trying to improve and adapt it. At the present time there are four main versions, the “conventional” Yagi, the “Double” Yagi, the “Tri Boom” Yagi and the “X Beam” Yagi, see picture (below) of all four types. All these use the tuned director / dipole / reflector to produce gain. Basically the Double Yagi (DY), the Tri Boom and the X Beam (XB) are all attempting to increase the number of directors (and therefore the gain) without making the aerial too long. The Double Yagi places two sets of directors side by side whereas the Tri Boom stacks three sets one above the other. The X Beam is a variation on the Double Yagi, it uses a pair of V shaped directors to mimic the longer flat directors of the Double Yagi and it is an attempt to limit the width of the aerial, and make it cheaper to manufacture.

Now we come to the contentious area of “element count”. It was always the convention that each director was counted as an element, the dipole was counted as one element and the reflector (in its entirety) was counted as one element. Unfortunately in this marketing* dominated world of ours this simple concept has been eroded. Many manufacturers now count all the individual elements of the reflector as separate elements, and when it come to X Beams some even count each “X” as four elements, when arguably that is double the real figure !
In any event, aerial gain is also dependent on the length of the antenna, and if it’s a grouped aerial, it’s not just about how many elements it has.
So, the moral of the story is : be very wary of manufacturers’ “element counts”....... 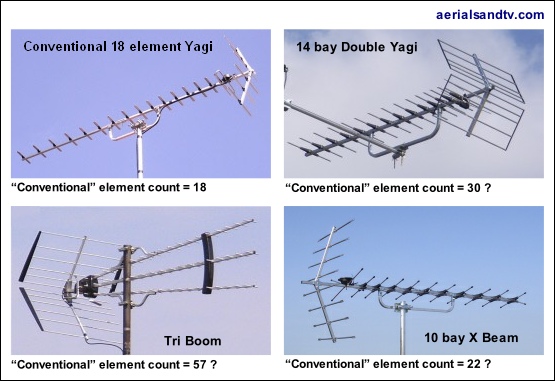 I am not an expert on aerial design, I just test them and know what works. In my experience, for a given number of elements, the highest peak gain figures are achieved by the conventional Yagi. The next highest efficiency is the Double Yagi, followed by the X Beam and in last place is the Tri Boom, in fact anyone who knows about aerials knows Tri Booms are not made to work, they’re made to sell, see test of SAC MUX MAGICIAN Tri Boom aerial. The best theory I have heard to explain these “league positions” is that since RF is longitudinal in waveform, the closer the director chain is to the direct line of sight to the transmitter (along which the wave is propagating) the more efficiently it will work. I must stress here that we are talking for aerials of the same number of elements, obviously a Double, Triple or X Beam would normally have more elements and may (but may not) therefore have more absolute gain, but remember that when talking about aerial gain one must bear in mind that peak gain and average gain are not the same thing. I have found that Double Yagis and X Beams do seem to “broaden” the gain curve* over the conventional Yagis, and the A group and B group gain curves show this quite clearly. This wider gain curve is obviously useful for wideband applications, which is why we recommend the DY14WB but not the Yagi18 in a wideband version, whereas we do recommend the grouped versions of the Yagi18.

* This is also be down to the fact that most X Beam type aerials have a larger reflector which will tend to increase gain at the bottom of the band (because it’s tuned for those frequencies).

So why do we see so many X Beams and Tri Booms around (most of which aren’t even needed, see Log Periodic aerials) whilst conventional Yagis are becoming less common and Double Yagis are strictly for the cognoscenti ? There may be a lot of Tri Booms about, but just because a particular product is common it doesn’t necessarily mean it’s any good, "stick on your windscreen" car mirrors for instance. Who came up with that crap idea ?
Well some cynics say that X beams and (particularly) Tri Booms look more impressive and so that’s why people use them, especially aerial installers who can then charge more for them !

So that’s explained all about the different types of Yagi aerial, and there’s also the Log Periodic of course, but there’s a third type of aerial which you sometimes see around, the Grid aerial. They also known as Fireguards, or Stacked Arrays, or Panel Aerials, or even Billboards, yes there’s almost a name for every day of the week, well the working week anyway. Technically a Grid is a type of phased array Yagi, hence the fact it’s on this page ! 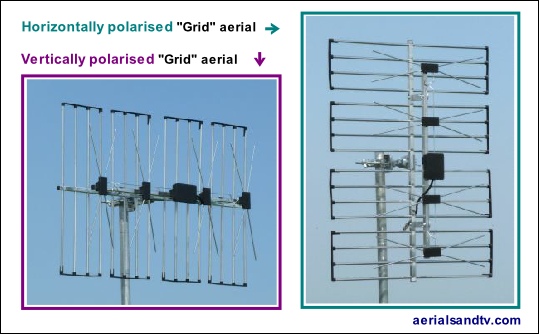 All Grids aerials are widebands and most consist of 4 X dipoles mounted in front of a large reflector. Some smaller versions of the grid aerial have only 2 X dipoles though the gain is obviously lower than with 4. The dipoles are linked together in such a way that a signal picked up from within the aerial’s acceptance angle will be in phase at the point where the aerial is connected to the cable (the "feed point") and this gives the aerial its gain and directivity. Element count is largely irrelevant with these aerials but using conventional element count it’d be either 5 or 8, take your pick. The Grid cannot be considered a high gain aerial, particularly at the very bottom of the band (it’s actually behind a DM Log at that point), but by the time the B group is reached the gain curve has reached respectable (medium) levels. [link] 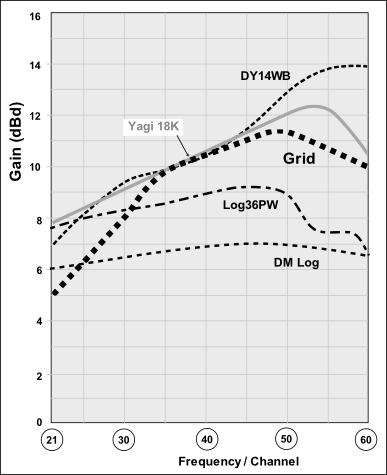 Since a Grid is effectively a little phased array that means the front to back ratio is high (that is to say these aerials are good at rejecting signals from behind), but the fact that each of the 4 aerials consists of only a dipole and a reflector means that the acceptance angle is large at around 45 degrees, and that isn’t usually what you want. Maybe that’s the explanation for why I found that the signal levels from the Grid on test did seem to vary more than for other aerial types. On the other hand such a wide acceptance angle does mean that if you want to receive from two transmitters which are within that 45 degree sector then you don’t need 2 aerials !  In analogue days the Grids was reputed to be an "anti ghost" antenna particularly for vertically polarised signals. These days digital signals don’t suffer from ghosting and they’re supposed to be less sensitive to multi path reception (which is effectively what "ghosting" was), but that doesn’t make them immune to it [apart from Single Frequency Networks]. Grids have good Cross Polar Rejection, they’re not that far behind the best of the high gain Yagis particularly for vertically polarised signals.

There is one other reason why some people still want to fit Grid aerials though, there’s only about 12" from the pole it’s mounted on to the front of the aerial, and that can make for a neat install if the receiving transmitter is in a perpendicular direction straight off the wall.

Last, but by no means least, Grid aerials are perfectly capable of picking up digital signals, so don’t let anyone tell you different....