Log periodic aerials use the same basic mechanism (of director + dipole + reflector) as a Yagi but instead of having one dipole (onto which all the RF is “focused” ) they use all the elements as potential dipoles. I say potential because for any particular frequency only one of them will be “resonant”, i.e. producing significant signal down the cable. At this particular frequency the element in front will act as a director and the one behind as a reflector.
The fact that one of the dipoles can be resonant for any part of the broadcast band means that Log Periodics have a pretty flat signal gain curve. They also have a tight polar response (i.e. they are less likely to pick up signals you don’t want [particularly from the rear]), a decent “cross polar rejection” and low wind loading. Finally Logs have good suppression of impulse noise which can be a cause of intermittent blocking and freezing on digital signals. Manufacturers have been known to claim that Log Periodics short this noise out to earth, but it’s just as likely that the aerials’ tight polar response just means they’re less likely to pick it up in the first place !
Unfortunately Logs have a relatively low gain figure, the shorter models being particularly poor in this respect. Even going for a grouped Log won’t give any more gain than the wideband versions (because the manufacturers have simply chopped off the part of the aerial which isn’t required to receive the relevant  group) which is why we don’t bother stocking them. Adding extra elements does seem to improve the gain a little but you can’t take that too far because the aerial would then become too long. Thus Logs are only really suitable for areas with a reasonable signal, though the Log36 is OK for medium signal strength areas as well.
Theoretically Logs shouldn’t really be used with cradles. Apart from the aforementioned points the Log Periodic is one of  the best antennas, particularly for digital, in fact the broadcast authorities use them where ever possible (for both receiving and transmitting).

However, it's not all good news, it must be said that keeping water out of Log Periodic aerial's junction boxes can be a bit problematic..... Thus I am unconvinced about the use of Logs at locations anywhere near the sea, particularly if there is a power supply, or amp with line power, in the system.
For such localities we recommend the Yagi 10K or Yagi 18K. 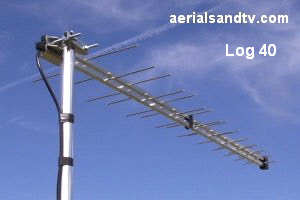 All of which begs the question, why don’t you see more Logs around ?
Well I think there are three main reasons :
First, the Log Periodic is a fairly recent development, more will appear as time passes.
Second, most aerial installers are notoriously tight. Logs are more expensive than the equivalent small Yagi and they’re twice the price of a Contract aerial......
Third, many installers are stuck in their ways and use what they’ve always used, especially if it’s cheaper as well !

We recommend that all Log Periodic aerials are installed slightly tilted up at the front end, see article below.
Log Periodics read short circuit across the input.
Some say that Log Periodics can be affected by different cable lengths, not sure myself, but if getting an unexplained low signal try altering the length of the cable.
Log elements, unlike those on a Yagi, must be in good electrical contact with the boom(s), also see maintaining your DM Log.
Try to avoid using amps with line power with Logs, particularly near the sea….

Log Periodic aerials : tilt them up at the front !

To my mind the Achilles heel of the log Periodic is it is very difficult to keep water out of the cable connection at the front of the aerial. To try and mitigate this we strongly recommend that all Log Periodic aerials are tilted up a few degrees - five degrees ? - at the front end (installed outside, this is not relevant for loft installs). Some say this can occasionally help with interference suppression (and the fact they’ve got a wide acceptance angle) but, more importantly, far more importantly, it helps to keep water out of the junction box at the front of the aerial. Both the models of DM Log we sell are supplied with tilting clamps to easily facilitate the necessary elevation, they are the only Logs available with tilting clamps (as far as I know ! ). 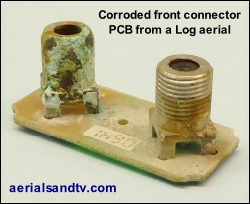 Unfortunately the Log36 does not come with a tilting clamp, and furthermore it cannot be retro fitted with one either. Thus, after fitting the aerial, the manufacturer’s advice is to :
“slacken off the wing nuts [even better, replace them with plain nuts ! ] on the supplied clamp, push the front end of the aerial up, then retighten the nuts. If the front of the aerial sags back down repeat the process but pushing the front end up further, repeat until a few degrees of tilt are present”.
Now, call me cynical if you like, but I think ensuring the front of a Log36 (or any other Log Periodic with a non tilting clamp....) is tilted up slightly probably involves bending the aerial a little ! Not that I think that would do anything particularly harmful to it or its performance. Some customers actually tilt the pole on the slots in the bracket which then introduces the requisite slight upwards tilt on the aerial.

NOTE : If your log periodic aerial has a sealed up boom (at the clamp end) it is worth considering drilling a hole (6mm ? ) in the bottom of the boom near the clamp end (the best place on a DM Log would be under the boom clamp plates to minimise water ingress when vertically polarised). This is to alleviate the possibility of water collecting in the boom and filling it up ! Take great care not to drill through any cable that may be in there though.....

On the subject of keeping water out of aerial junction boxes I have to say I think trying to stop water getting into them is very difficult, and that is particularly true for Log Periodic aerials, in fact I'd say that was their Achilles Heel (apart from relatively low gain).
Obviously you do your best to limit water entry but it can be so difficult to stop all of it 100% that I’d recommend an alternative approach and that would be to ensure that any water that does get in there drains out easily, plus you want to discourage damp. You do that by drilling drain / breathing holes in the bottom of the junction box. The reason why aerial manufacturers don’t tend to do this is that aerials can be used vertically or horizontally polarised and therefore they don’t actually know which is going to be the bottom of the junction box ! You, on the other hand, do know, so can take the appropriate action !
Also see line power leakage corrosion issues, particularly with Log Periodic aerials !

Some of these Logs on test are used almost exclusively for boats and caravans, but others often get installed on buildings in reasonable signals. For comparison, we also have the gain curve of the DM Log Periodic v the Log36  and other ATV recommended wideband Yagi aerials, also see TV aerials tests.
It should be noted that even the DM Log is not a “high gain” aerial though even the lowest gain of the aerials on test here is “high gain” compared to an Omni aerial ! One should always remember that high gain aerials are not actually suitable for boats / caravans anyway because of their size / wind loading, and their susceptibility to damage.

Last, but by no means least, an amplified low gain aerial is not, by any means, the equal of an unamplified aerial with higher gain. 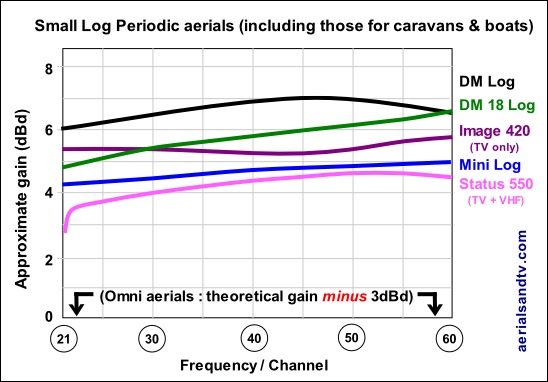 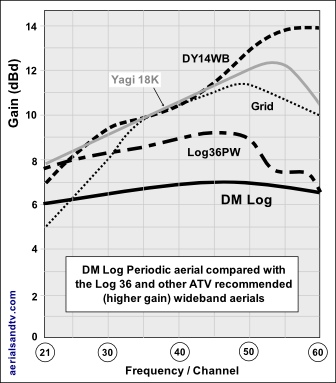 Notes
in reverse order we have :

Status 550
This is undoubtedly a clever design for a touring aerial, particularly the fact you can leave the aerial up all the time, and adjust both the direction and the polarity of the aerial from inside your caravan, though you do have to drill a hole in your
roof, and it looks crap on a narrow boat. It has the lowest gain of any of the aerials on test but, let’s be reminded, it’s still far better than an Omni. Inside that casing (see below) is a little 18 element log periodic aerial. The aerial in the picture is vertically polarised, aiming at Oughtibridge relay in fact. 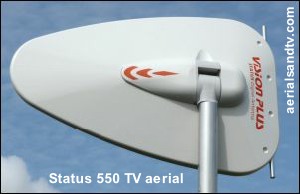 Ever wondered what’s inside a Status caravan aerial ?
The aerial’s made of tin foil but we can excuse that as its permanently sealed into its casing.
Note the VHF elements tagged on the back. These may be the cause of the 2dB drop in gain over the Image 18 aerial I also tested though the reduction is more likely due to the fact that cable routing on a log periodic is very important to maintain the gain of the aerial and on this design the cable routing is back up the aerial boom (unlike all other Log Periodic aerials, including the Image). [link] 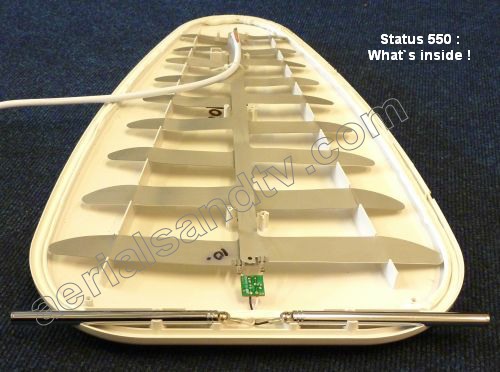 But what’s this ! The manufacturers of the Status use (certainly up to May 2013) Low Loss CoAx ! That, is an inexcusable bodge, I can’t imagine what they were thinking…. And, unlike every other aerial manufacturer, they wouldn't lend me an aerial to test, I actually had to buy one (what did they have to hide, the cable perhaps….), so thanks for that, not.

For their size these give a fair signal. The one I had wouldn’t mount vertically polarised (I had to fart about with an L section pole….), and it isn’t easily tiltable. Also, important for a touring aerial, the rod type alloy elements can snap off if you try to straighten them when they get bent, which they will. Bill Wright reckons the polar plots of these are very poor though that may equally apply to all small Logs.

These may not have quite as much gain as a DM Log (nor are they as fixable when damaged) but for their size they actually work pretty well. Note the adapted clamp, the aerial I had didn’t have a clamp and its unorthodox construction meant a conventional clamp (and pole) won’t fit it which is particularly unfortunate because we recommend that Log Periodic aerials are tilted up slightly at the front. Finally, and somewhat surprisingly, the cable is Low Loss Coax !
If I were buying one of these I’d buy the 420 rather than the 430 with the VHF elements as they may well negatively affect the UHF gain. 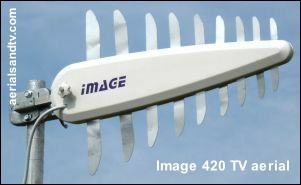 They work very well for their size, they come with tilting clamps and have all metal construction This makes them robust but, even more importantly, they are easily fixable when they do get bent.

More details of the DM Logs. 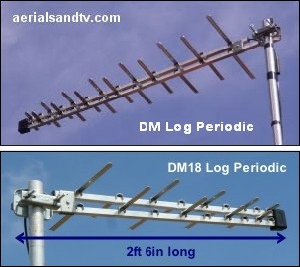