700MHz clearance occurred at Ridge Hill in March 2018 but nothing much changed apart from the “Ridge Hill West” MUX dropping from 20kW to 2kW.

Ridge Hill TV transmitter is located 8 miles SE of Hereford and it is somewhat unusual in its location because there is no large city within 30 miles so its population coverage is only about 500 thousand. Where Ridge Hill is useful is as an alternative (importance of “line of sight”) to other transmitters which may be nearer. There are even people right up in Birmingham on Ridge Hill if the site just happens to have a decent view to the SW.
The transmitter opened for VHF (405 line) transmissions of ITV in 1968, UHF broadcasting (on analogue) started in 1973. Analogue transmissions stopped in 2011, being replaced by digital.
The height of the mast is 160m (a.g.l) and it has 4 sets of stays to keep it up, also see How High is High ? The site height is 203m and this gives wonderful views over to the east. Clearly visible to the NE is the Herefordshire Beacon (site of the Iron Age "British Fort") which has an altitude of 338m and if you get a chance to visit the latter I would do so as the views are stunning for almost 360 degrees. In fact the only obstructions are North Hill (397m) and its neighbour the Worcestershire Beacon which is the highest of the lot at 425m, which must surely one of the best 360 degree views in the country. Note for those not keen on walking up mountains the Herefordshire Beacon is much the easiest to ascend !

The transmitter can be seen from miles around including from the M50 which runs about 5 miles to the South. The latter was opened (from the present Junc 1, A38 turn off) in 1960 and was extended Eastwards to the M5 (Northbound) in 1962. The Southbound M5 from this point didn’t open until 1970. The railway was what really put this area (The Malverns) on the map and the Worcester & Hereford Railway opened in stages from 1859 to 1861, this subsequently became part of the Great Western.

As with all main transmitters Ridge Hill is horizontally polarised. It was originally an A group for analogue transmissions, before (temporarily) becoming a wideband whilst digital and analogue were being transmitted together, then finally reverting back to an A group when analogue went off in 2011.

For the most up to date MUX to channel allocations etc put this postcode HR8 2PG into the Freeview checker.
Also see Central region Freeview transmitters.

The transmitter has eighteen smaller repeater transmitters to improve its coverage in poor reception areas.

Ridge Hill actually transmits MUX2 twice, ITV West on CH29 (but only to the South/SE ? ) and also ITV Central on CH25.

See this customer aerial report, and the wrong aerial for any A group transmitter (in this example Crystal Palace). 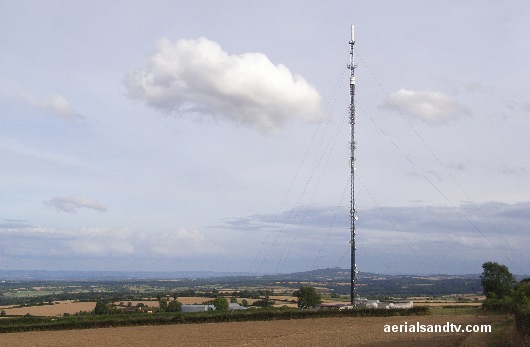 Ridge Hill television transmitter showing some of the fabulous views. 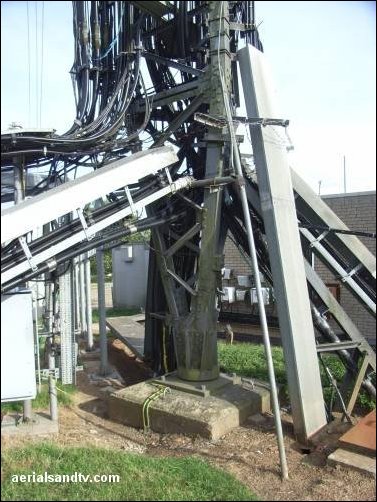 The base of Ridge Hill TV transmitter.

Note the cables carrying all the various signals up to the transmitting aerials, also see picture below. 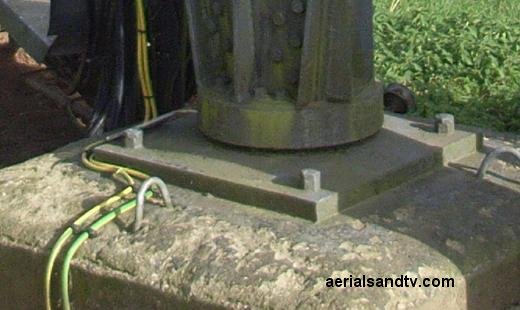 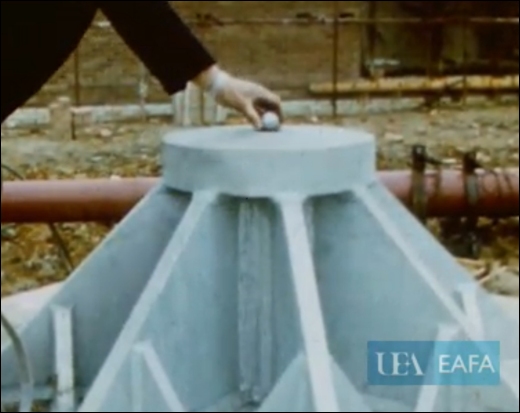 Close up of the very bottom of Ridge Hill, a cable stayed mast. Note that the design allows a certain amount of movement which is necessary to enable the structure to sway slightly and thus avoid too much stress on the space frame steelwork. In fact these type of masts are usually mounted on a ball, the adjacent picture of a ball being fitted - to Mensdlesham mast - is from this video (approx 6 minutes from the start) from the East Anglian Film Archive.
Note. There are huge forces on the base of “stayed” masts. This design of structure weighs between 150 and 250 tons (depending on the size) but the tubular types, e.g. Mendip, are about twice this weight, though, just to confuse the issue, tubular masts are not mounted on balls ! Anyway, in the case of the more usual space-frame type masts, like Ridge Hill, you have the additional force imparted by the tension on the stays, in approximate terms this would double the effective “weight”.[link] 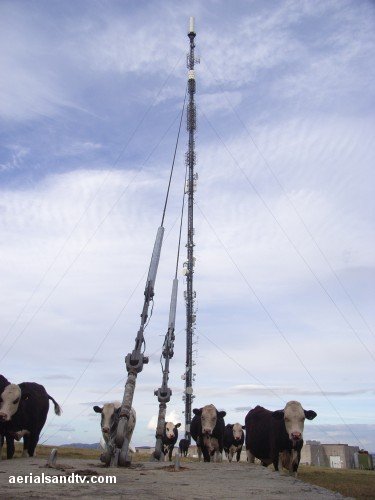 This is my wife’s favourite picture on the entire site. As I was prone on the floor trying to get the right angle for this shot (hopefully not lying in anything too unmentionable...), a herd of bullocks became very interested and were advancing towards me in a menacing fashion. Believe me they look big and frightening when they’re towering over you so I sprang up and promptly landed in a pile of something or other (probably the other....), all the while my good lady was beside herself with laughter. I hope you appreciate the resultant picture....... 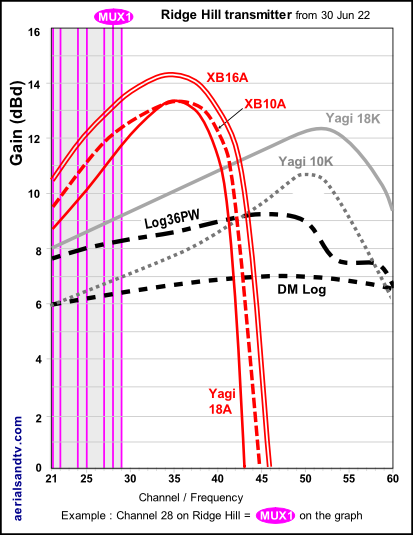 For the most up to date MUX to channel allocations etc put this postcode HR8 2PG into the Freeviw checker.
Also see Central region Freeview transmitters.

Some of the transmitters to which Ridge Hill is often an alternative are Mendip, Wenvoe, The Wrekin, Sutton Coldfield, Bromsgrove, Malvern, Lark Stoke and Oxford and the channels for these transmitters are included on the Ridge Hill channel allocation guide which lists the transmitters frequencies. Note how they all “dove tail” together. The Channel Allocation Guides can be very useful in the diagnosis of co-channel interference problems and can also be invaluable if you are trying to find a spare channel for a modulated output (e.g. for a Sky box or CCTV system) to be added to your TV setup/distribution system without suffering from co-channel. 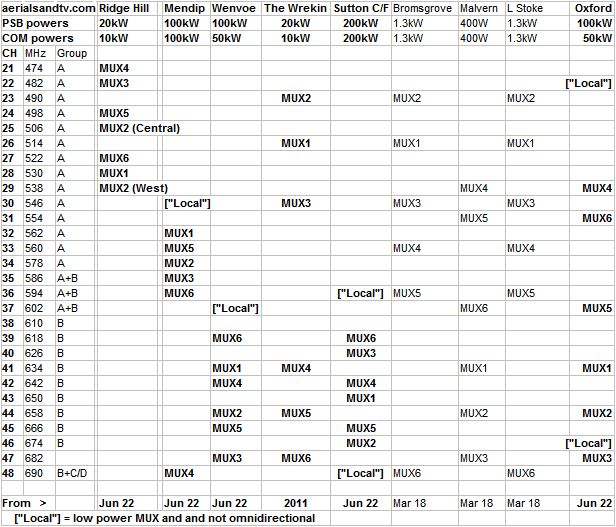