Importance of "Line of sight" to RF reception

Importance of “Line of Sight”

As has been stated on a few pages of this site, in the UHF* game "Line Of Sight" is (almost) everything, i.e. which direction does the antenna have the clearest run at / best view of the transmitter ? It is for this reason that aerial installers are amongst the most knowledgeable about where all the hills are in any particular area. They also tend to know where all the tall buildings are, and the large trees for that matter ! In fact if a (skilled) installer has problems with signal reception due to trees for example, his first thought wouldn’t be a higher gain aerial or an amp, it’d be is there an alternative transmitter (in a different direction) that he could try ?
Remember that radio frequency (RF) waves, just like light, are another type of electromagnetic radiation. So it is, literally, a case of “line of sight”, much in the way that shadows are thrown by visible light. That said, RF can be reflected and refracted in the same way as the visible part of the spectrum (i.e. light) and this helps to explain some of the “Black Art” effects that TV/radio reception can exhibit.
One of the most amazing examples of the effect of line of sight and altitude was a customer near Bacup (north of Rochdale) who was actually on The Wrekin transmitter, near Telford ! That's 72 miles away...... Winter Hill transmitter was only 14 miles away and it transmits at 100kW (The Wrekin is "only" 10kW to 20kW), but, obviously, there was a soddin' great hill in that direction ! 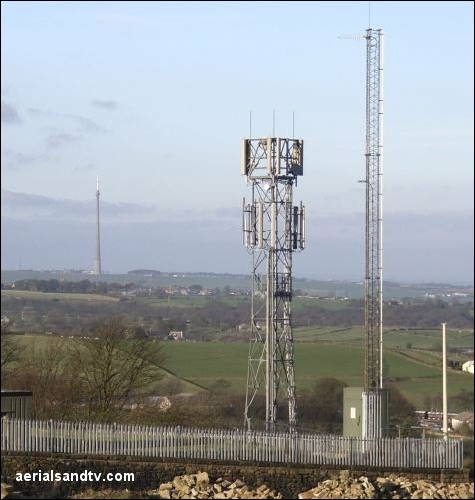 Millhouse Green Transmitter (the TV transmitter is the right of the two in the foreground) is a repeater off Emley Moor and the adjacent picture clearly shows the importance of “Line Of Sight”. Even though Emley Moor is visible (and only 6 miles away) the village in the lee of the hill [left centre of the picture] needs a repeater because the signal is so poor !

The repeater receives its signal from Emley through the Log Periodic aerial midway up the mast then retransmits it from the Log at the top of the mast into the valley to cover the village of Millhouse Green. [link]

Below is a table of the signal levels which were measured at our aerial test site at 1140ft on the hills NW of Sheffield, and at our shop. It is also on two other pages in this site but no apology is made for its duplication such is the importance of the message it is conveying. For more details of the levels and their significance see “Coverage Maps”.

Note that in the table below for "the shop", the figures are off a DM log test aerial, not the shop’s aerial array. On the latter Belmont was significantly better, albeit only the (1st 4) MUXES within the A group

We had the topography map below specially created for us at great expense. The lowest ground is purple and then we go through blue, green, yellow and various shades of orange to reach the highest altitude, in addition spot heights are indicated at various points. The chart is useful in helping us supply the correct aerials to customers from areas with which we are not familiar.

The map is also fascinating for other reasons. For instance it explains why, when the first "mainline" railway (The North Midland Railway from Derby to Leeds) came to this part of the world in 1840, it didn’t come through Sheffield. At that time the locomotives didn’t have the power to climb steep gradients so alignments were chosen which minimised inclines. A look at the map shows quite clearly how the low ground of Rother valley passes East of Sheffield and that’s precisely where George Stephenson (and his son Robert) built the line. It wasn’t until 1870 that a South bound line was constructed from Sheffield to Chesterfield by the Midland Railway. The latter had a fairly steep (for the time) incline up to Dore, then the 1.2 mile Bradway tunnel and finally a long descent down to Chesterfield. The valleys used for the latter line are also clearly identifiable on the map.

One other thing, ever wondered why Sheffield hasn’t got an airport ? Quite simply there isn’t any room for it ! It is easily discernible from the map that the only significant area of flat land (for the runway) in this area is the Don Valley and that has always been fully utilised. Having said that I know a few people (mainly long suffering husbands......) who would be delighted if Meadowhall were flattened ! 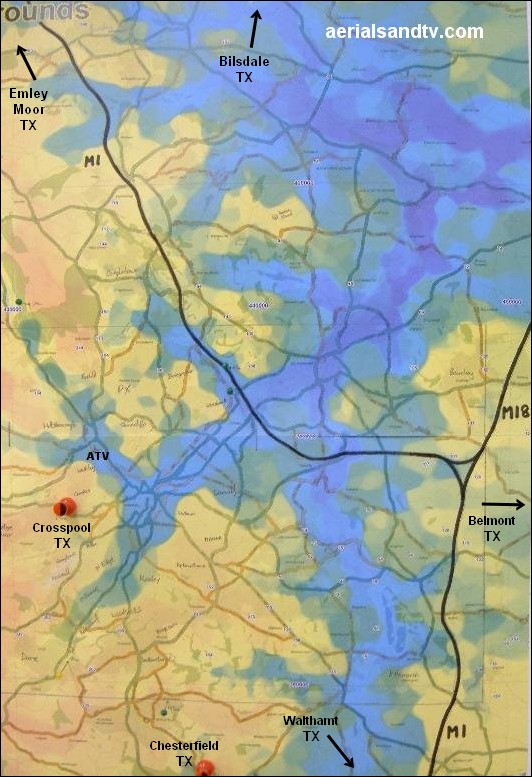 ATV’s topography map of the Sheffield area, note the M1 drawn on in black.

Incidentally if you’re ever lost, looking at the local antennas (assuming you know which transmitter they’re on) can help you to establish which direction you are travelling in ! Even more so for satellite dishes, they always face South, who needs Sat Nav, when you’ve got, well, sat nav ?