10 Aug 21 on : Fire disrupts transmissions from Bilsdale transmitter.
See if you can use another transmitter (your aerial may need realigning and your TV retuning) :
Alternative transmitters in the Bilsdale area
Postcode checker to check if any of the above are are possible.

A temporary transmitter (called "Bilsdale Quarry") started transmissions on the 13th Oct. It is situated, unsurprisingly, in a nearby disused quarry.  "Bilsdale Quarry" transmitter gives about 90% of the coverage of the original 300m transmitter. A 78m "interim" tower on the original transmitter's site went into operation on the 23rd Feb 2022, but that isn't that much higher than "Bilsdale Quarry" ! Unfortunately, 100% of the original coverage will only resumed when the replacement  full height mast is constructed.
The transmission powers are 50kW on all 6 main MUXES. It will be noted the powers on the COM MUXES are the same as the original mast, but the PSB powers are down (from 100kW). But even for the transmissions which are at the same power as before coverage will still be inferior due to the temporary mast being appreciably shorter.
No FM is transmitted from this mast, that is coming from Eston Nab (just south of Middlesborough).

A replacement full height Bilsdale mast will be built and should be operational "by Spring 2023", the plans are here. 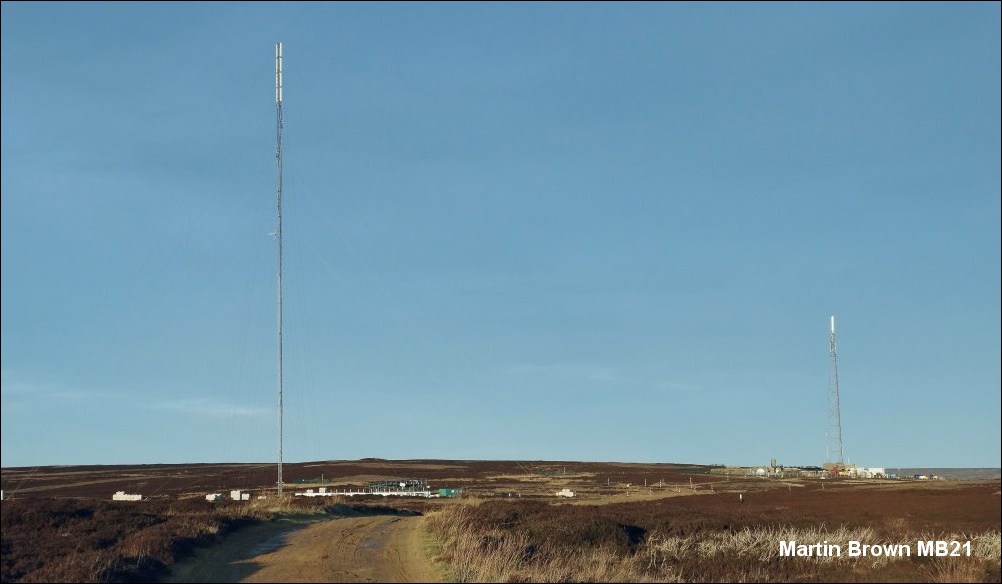 On the left we have the temporary Bilsdale Quarry transmitter.
On the right is the Bilsdale "interim" transmitter tower, see below.
Picture Martin Brown MB21 Jan 22 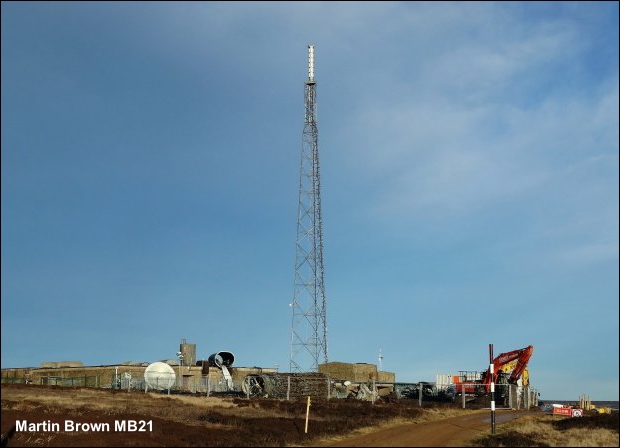 Bilsdale "interim" transmitter tower, built on the site of the original mast it went into service on the 23 Feb 22 and is due to remain transmitting until the replacement full height mast goes into operation ("by Spring 2023").

Bilsdale television transmitter was ( ! ) a "guyed mast" structure (309m in height) and was identical to Waltham and Mendip, though it was built by JL Eves (now Babcock) whilst the other two were constructed by BICC (now Balfour Beatty). The mast was a tubular structure to the top and had in internal lift, though this was out of use following the accident at Belmont. The transmitter was originally owned by the BBC before being sold off to Crown Castle (Castle Transmission International - CTI) then to National Grid Wireless and finally to Arquiva (sic).
Opened in 1969, the transmitter site is about 15 miles SSE of Middlesborough, it can be seen from the A1 on a clear day. As one travels North it's on the right. A slightly better view can be had from the railway line (between York and Darlington) as it is a little closer, perhaps 12 miles away. The A19 from the A1 up to Teeside passes closer still.
Due to the fact the 309m mast (see How High is High ? ) was built on a 376m mountain the overall aerial height/altitude is 685m (2260ft) and unsurprisingly this is one of the highest in Great Britain. The latter fact obviously helped its transmission range, but like all transmissions they are subject to the "line of sight" rule, even with a "high gain" aerial !

Bilsdale's population coverage is around a million. Many of those in York, Darlington, Stockton, Middlesborough, Hartlepool, Sunderland and Harrogate use Bilsdale's transmissions, though it can also be received at sites on high ground in Sheffield, that's 70 odd miles away!

For the most up to date MUX to channel allocations etc put this postcode TS9 7JS into the Freeview checker.
Also see Tyne Tees region Freeview transmitters.
As widely reported Bilsdale's transmitter mast was subject to fatal (eventually) fire damage on the 10th August 2021. By October a temporary transmitter (Bilsdale Quarry) was in operation broadcasting Bilsdale's TV output on the same channels. This was itself replaced by a more substantial "Interim tower" on the 23rd Feb 2022. The powers of the COMs (MUXES 4 to 6) are the same at 50kW, but the PSBs (MUXES 1 to 3) are on half their original power, i.e. 50kW rather than 100kW. Also the fact both the aforementioned transmitters are only about 80m tall, as opposed to the ex guyed mast's 309m, means their effective coverage is significantly less (for more info see article at top of page). Bilsdale "normally ! )puts out up to 100kW of digital power which makes it the 13th most powerful transmitter. Note the huge increase in power at the 2012 digital switchover.

Bilsdale is horizontally polarised was originally an A group for its analogue output but only 3 (the PSBs) of the 6 main digital MUXES can still be received with a group A aerial. MUXES 4 to 6 are out of band so most people would have to change their aerial (to a K group or wideband).

The transmitter has fifteen smaller relays (or repeaters) to improve coverage in poor reception areas within its coverage area.
There is one "Local" channel allocated to Bilsdale, CH30, mainly for a local Middlesborough TV station. This is within the K group.

For Bilsdale we recommend the Yagi10K for strong signal areas, the Log36 for medium signal areas, and the Yagi18K or XB10K for poor signal areas, the latter aerial being particularly well suited to loft mounting. The XB16K is for those with the most marginal signals. The dimensions and test performance of the aerials are on the relevant buy pages.

Because of wideband antennas poor response at the bottom of the band, anyone who really requires a “high gain” aerial on a K group transmitter (e.g. Bilsdale) should actually fit a K group ! See Bilsdale transmitter’s graph.
But not that many people actually need a high gain aerial anyway........ 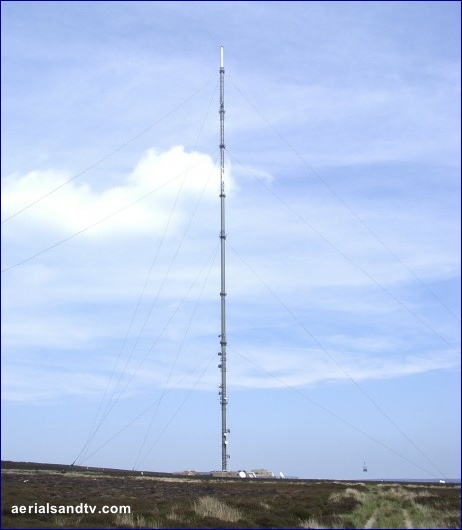 The original Bilsdale television transmitter from the moor below it. Note the repainting in progress (it certainly seemed to need it !) and the “Bosun’s Chair” being used to ascend the mast, see below. 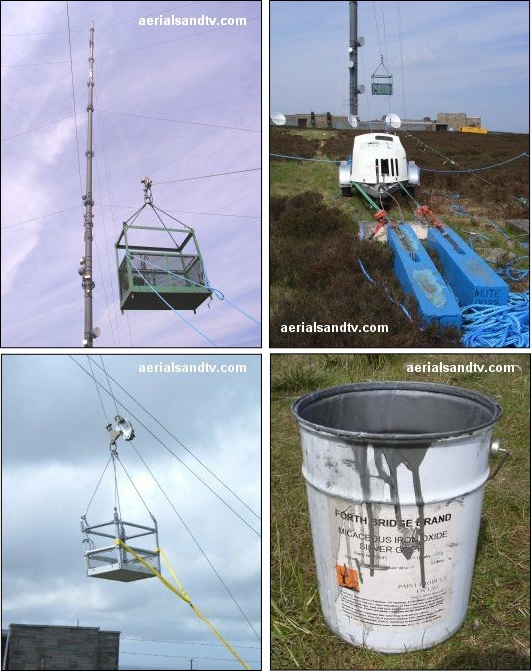 “Bosun’s Chair” being used to access the original Bilsdale mast whilst it was being repainted in June 2007. Above the right is the winch (and its anchors ! ) to hoist the “chair” up as required. Below (left) is the same system being used on Redruth (in 2005) and on the right the type of paint used to coat the structures. The masts are galvanised with a 25 year warranty against rust, after that time they’re repainted every 10 years with etching primer then Micaceous Iron Oxide on top of that.

And we all love the Forth Rail Bridge don’t we, I know ATV do !

Bilsdale  transmitter : graph of its transmissions against the gain curves of the aerials we recommend for it 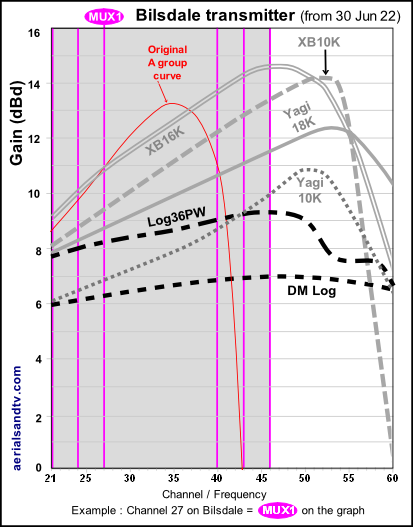 Bilsdale's channels from June 2022 in relation to the UHF TV band and the gain curves of the aerials we recommend for it.

Note the channels out of the original A group of the transmitter, the PSBs are within the A group though. Also see other relevant K group curves.

For the most up to date MUX to channel allocations etc put this postcode TS9 7JS into the DUK checker.
Also see DUK Tyne Tees region transmitters.

The table below includes the same information for Pontop Pike, Chatton, Fenham, Emley Moor, Keighley, Belmont and Oliver's Mount. All these transmitters are receivable within Bilsdale's coverage area and this information can be very useful for identifying alternative transmitters. The channel allocation guides can be very useful in the diagnosis of co-channel interference problems and can also be invaluable if you are trying to find a spare channel for a modulated output (e.g. for a Sky box or CCTV system) to be added to your TV setup/distribution system without suffering from co-channel. Note how most of the channels from all the transmitters neatly "dovetail" with each other. Also check Bilsdale's fifteen smaller relays. 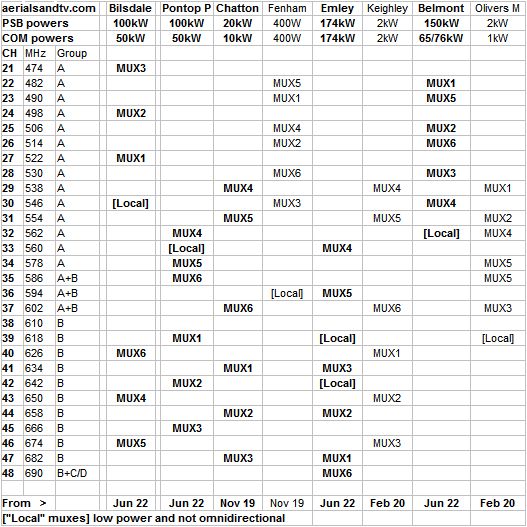