The FM half wave dipole works very well for FM but also works pretty well for DAB.
“Hard wired” dipole which is preferable for weather proofing….

The aerial comes with either a rotating clamp to fit poles up to 2″ diameter,
or a surface mount bracket
or a loft mounting kit.
When making your purchase, please choose your preferred configuration.

It doesn’t take much study of the results table (below) to discover that if you want FM and DAB (from one aerial) the best all round antenna is the Half Wave FM open dipole, preferably installed vertically so it will work omni directionally and will also pick up DAB pretty well too. FM gain is about 0dBd.

The vast majority of sites in this country will get a perfectly acceptable FM signal with one of these aerials, and the great majority a decent DAB signal as well.

The model we sell will mount both horizontally and vertically, but it is also possible to use it diagonally. If you are struggling with a particular frequency then utilising the latter polarity may help bring it in, it’s rare but at least it’s another option. On the other hand horizontally it has a bit of a null off each end (and thus a bit of directivity) so this may be useful to decrease a bit of interference if required. It is also quite acceptable (and easy) to shorten the elements in order to improve the DAB (at the expense of FM) if you decide in the future that DAB is more important to you. I’m not an expert in antenna design but we cut down the elements from 75cm to 38cm and DAB performance improved to just behind that of a DAB dipole, though the FM dropped off markedly.
Being a half wave dipole it naturally has a 75Ω impedance, i.e. matched to the cable and (most) receivers for maximum signal transfer. Thus an open dipole should not have a balun, if it does there’s something wrong somewhere !
Incidentally if you are planning to distribute DAB and FM (or just DAB) through your system you must make sure that your amps and/or diplexers are compatible for it. The amps (and diplexers/triplexers) that we sell are suitable for both, but some are not…
Some crude tests at home indicated that a Half Wave dipole was giving about 5 to 10dB more (depending on frequency) than one of those single wire setback aerials that some small radios are supplied with. So it is entirely possible that putting a Half Wave Dipole in your room (as opposed to outside or in the loft where it will undoubtedly work much better) may be sufficient to improve your signal over the supplied setback aerial, make sure your radio has an external aerial socket though!
Our half wave dipole is supplied with either a 2” rotating clamp or with two way surface bracket, though it should be noted that this aerial will work best when its full height is exposed to the direction of the transmitter. If mounting in a loft try to ensure the direction of the TX is through the roof rather than any end wall. Incidentally, even when the aerial is in its vertically polarised “omni directional mode” moving the aerial around its mounting pole can make a difference to the received signal, and not just where the pole is in front of, or behind, the aerial’s alignment onto the transmitter. I was surprised to discover this and suspect it may to be reflected RF waves off the roof.
Lastly, if the aerial is polarised vertically, some people have found a difference in signal depending which of the elements the cable’s centre core is attached to.

See wiring up an FM dipole and aerial reports for the Half Wave Dipole and other FM / DAB aerials.

The FM Half Wave aerial is also available with a loft kit comprising : 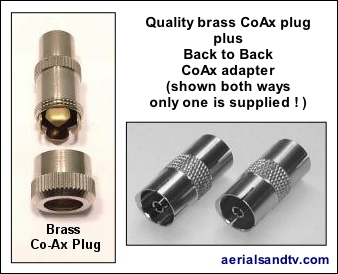