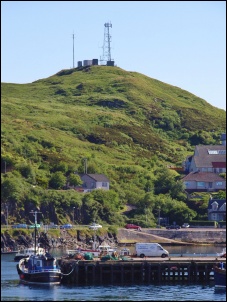 In transmitter pictures I love :

The sun in the right direction and a beautiful blue sky in the background, but this is obviously both geographically dependent and weather dependent.........
Some countryside in the view, but that is quite difficult if you think about it because most transmitters are on the top of hills !
I like trains, so any picture with also has a train in it is odds on for inclusion, plus the shot has also required patience, which is something I am not blessed with, so the extra effort required makes it more satisfying. 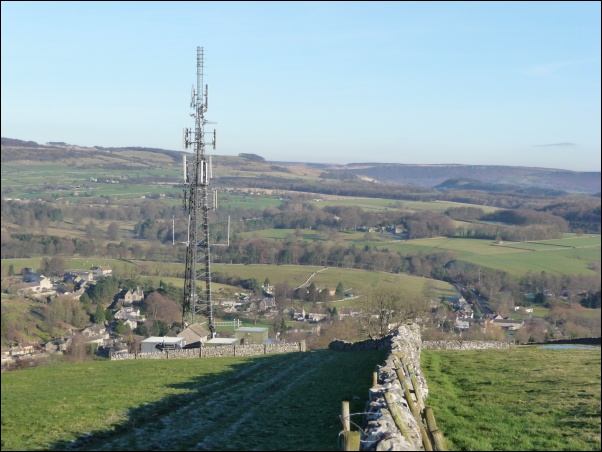 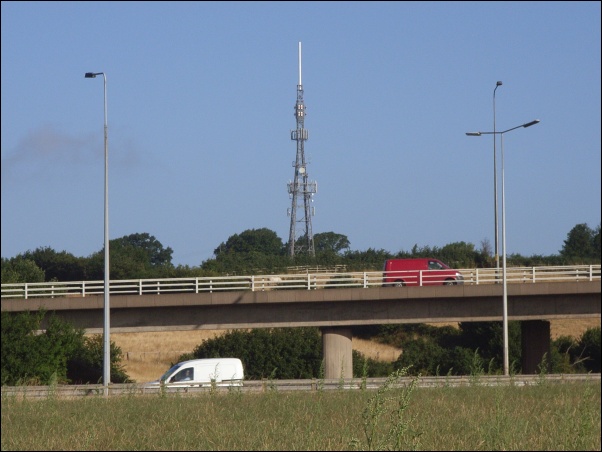 This is Bromsgrove transmitter, which is a relay of Sutton Coldfield.
I like the pic because it took a lot of patience waiting to get the vehicles in the right places on the M42 / M5 slip roads. The red van is travelling east (M5 to M42) whilst the white van in the reverse direction. It also took sometime getting in just the right place so I could use telephoto to get the perspective right. I also feel the shot has a nice symmetry with the lamp posts, normally something you’d try to avoid getting in the picture ! Incidentally this picture was taken at 8.00 on a Sunday morning yet there was still quite a bit a traffic around.....
Bromsgrove transmitter location
Bromsgrove transmitter page on MB21 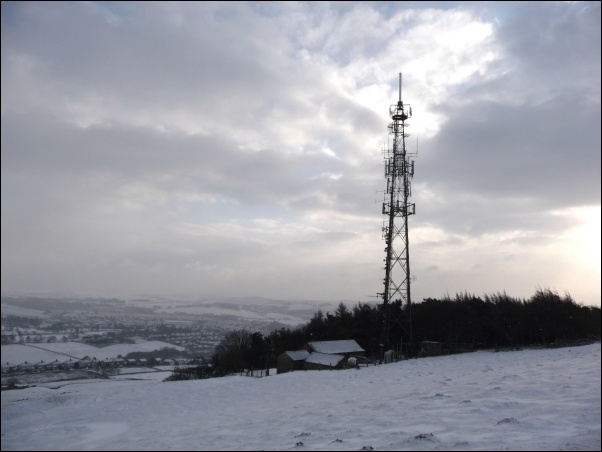 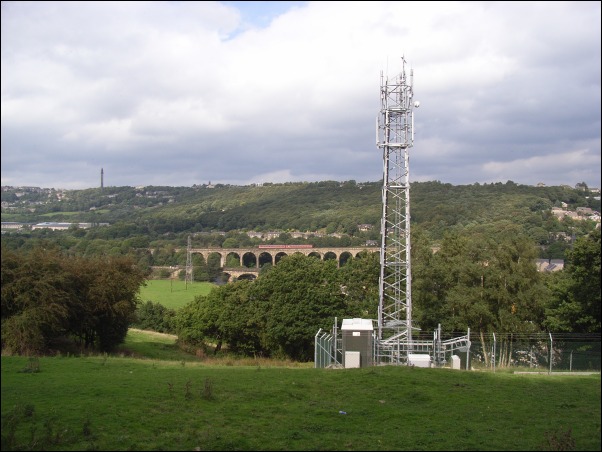 There’s actually quite a bit of interest in this view looking NE over Copley transmitter (which is a relay of Emley Moor).
On the hill in the distance on the left we have the 275ft Wainhouse Tower (1871/75), it is reputed to be the tallest folly in the world. Halifax is just beyond the aforementioned hill. In the middle distance is Copley Viaduct which is actually a listed structure. The viaduct is 66ft high and 440 yards long with 23 arches, it was completed in 1851 and is situated on the Calder Valley railway (now called the Caldervale line) from Halifax to Rochdale (or Burnley). On the viaduct is a Class 155 train heading west on the 14.07 Leeds to Manchester Victoria service (20 Sep 06).
Copley transmitter location
Copley transmitter page on MB21 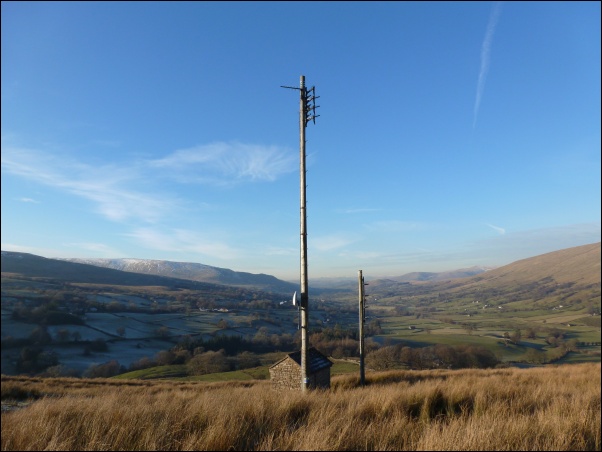 Dentdale transmitter (which is a relay of Caldbeck transmitter) is located at the intersection of Dentdale and Deepdale, Dentdale runs form the right to the centre of the picture and Deepdale in from the left. The repeater retransmits Caldeck’s signal up all three arms of the Y.
A trip to Dentdale is a good day out, a run up the spectacular Settle & Carlisle line then a 3.5 mile e/w walk to the transmitter. Even better the trains from Leeds give you three hours to complete it, which is just about right for a leisurely stroll. I’ve actually been to Dentdale three times in an effort to get a picture in the sun and with good visibility and the third time was a bit stressful in that the weather forecast had assured me only that morning that it’d be sunny there with "excellent" visibility, but Leeds was fog bound, even Skipton was, so I really had resigned myself to a (semi) wasted trip. However, on the train reaching Settle it was sunny with fair visibility and by Ribblehead it was glorious !
On the return trip Leeds was still fog bound.......
Dentdale transmitter location
Dentdale transmitter page on MB21 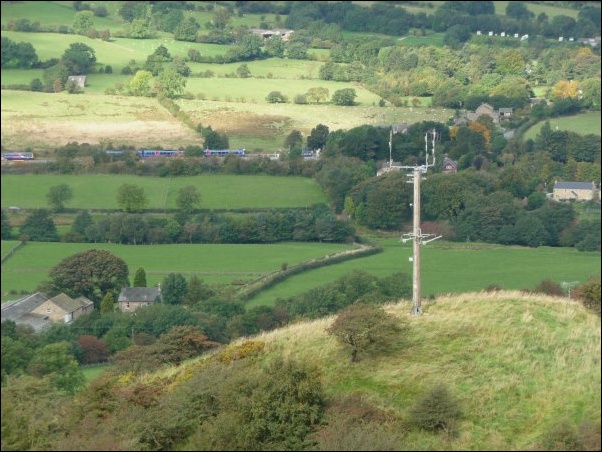 Edale transmitter (which is a relay of Emley Moor) in the beautiful Hope valley Derbyshire. This picture has not one but two trains in it! A Northern Rail stopper has just left Edale station to go west to Manchester, whilst to the right a Trans Pennine fast service is about to travel east non stop through the station on its way to Sheffield and (eventually) Cleethorpes. The picture not only took a lot of patience but also required me to walk over a load of bogs and up a steep hill to get in just the right position to use full telephoto to get the trains anything like visible in the perspective ! I had a bit of luck with the pool of sunlight on the transmitter, but, being a perfectionist, I’d really have liked the trains to also be in the sun.....
Edale transmitter location
Edale transmitter page on MB21 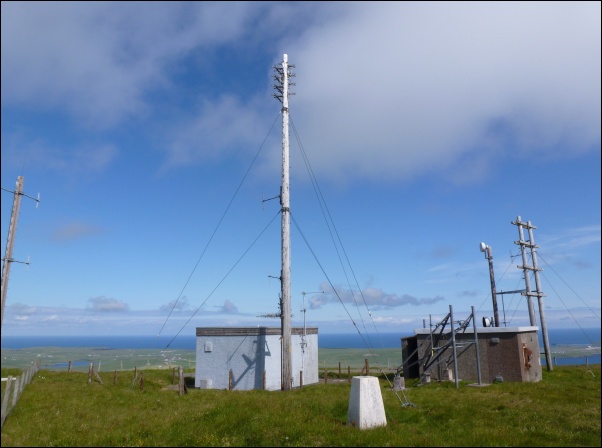 Fitful Head transmitter is situated in the south of Shetland, just NW of Sumburgh airport. It is a relay off Bressay transmitter. The picture above was taken in June 2012 and is towards ESE. I have to say the view from the top, particularly on a sunny clear day like that in the picture, is absolutely fabulous, possibly one of the best in the UK. It’s a full 360 degree sweep right round, you can see most of Shetland, and, over to the West, the island of Foula. My photographic panorama is available on this MB21 page. It also includes some valuable tips about avoiding Bonxies* when going “off the trail” in Shetland !

Mallaig transmitter (which is a relay of Torosay transmitter), or more accurately Mallaig town with the transmitter in the background, but what fabulous day out this was. We were staying a few nights in Fort William having got the sleeper train up there and on this day we caught the train to Mallaig which must be one of the most scenic journeys in the world. I managed to get some shots of the transmitter (in the sun, with a blue sky ! ) before we caught the boat "over the sea to Skye", though I’m sure we enjoyed the trip on the CalMac ferry rather more than Bonnie Prince Charlie did in 1746...... From Armadale the bus took us to Broadford to have a look round, then back to Armadale castle for yet more, well, looking around, before catching the ferry back to Mallaig and the return run on the spectacular line to Fort William. All done under our own steam, which made it all the more satisfying, what more could you want ?
Mallaig transmitter location
Mallaig transmitter page on MB21 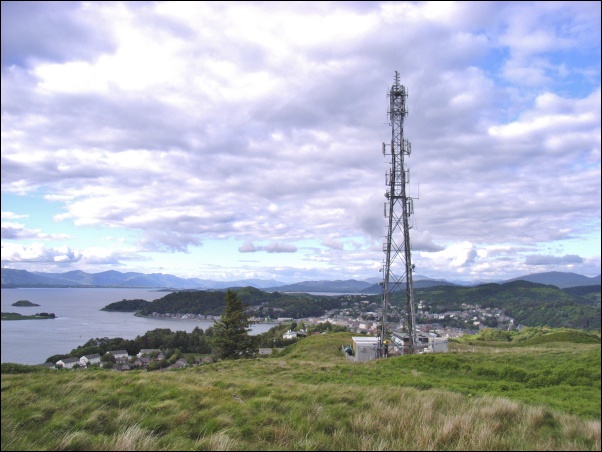 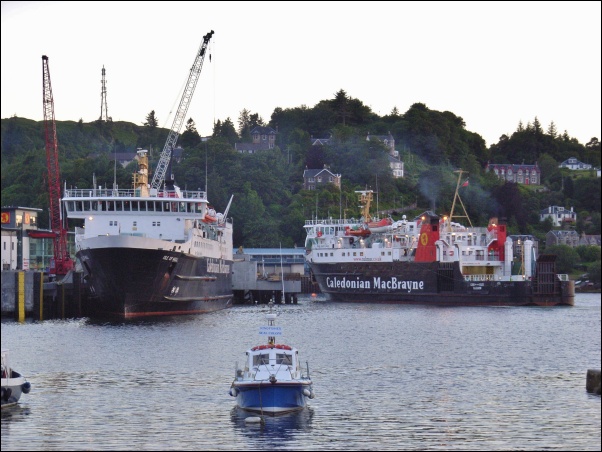 Oban is a relay off Torosay transmitter.
Top picture is a view NNE from Druim Mór towards Oban. Beyond the headland (in the middle distance) is the island of Lismore, and beyond that across Loch Linnhe is Kingairloch. Mull would be just off to the left (i.e. west) of this picture.

Bottom picture shows the harbour with the CalMac ferries. On the left we have Isle of Mull which is used, surprisingly enough, on the short run to Mull. On the right is Lord of the Isles which we’d used earlier in the day coming in from Lochboisdale (South Uist). We were up in Oban at the end of a week island hopping using the CalMac ferries, and great it was too, and it didn’t rain, that much. Incidentally, you don’t normally have to pre book your tickets on the ferries if you’re a foot passenger, just turn up and go. That may not be such a good idea if you’re in a car though !

This picture was taken (in late June) at 10.00PM ! We’ve been to the Shetlands (twice), and it stays dark even later there, unfortunately the winter is the opposite.... So here’s a hint, if you’re going to Scotland, go in the summer. 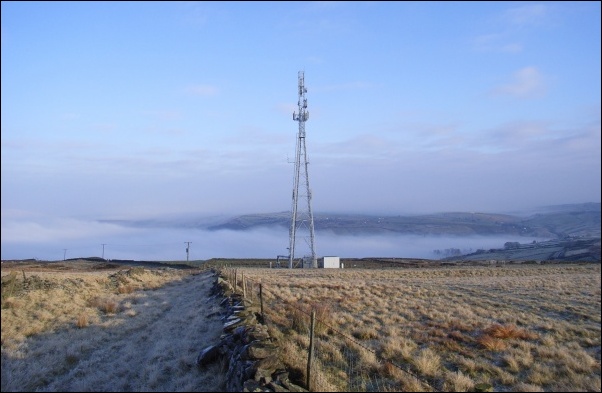 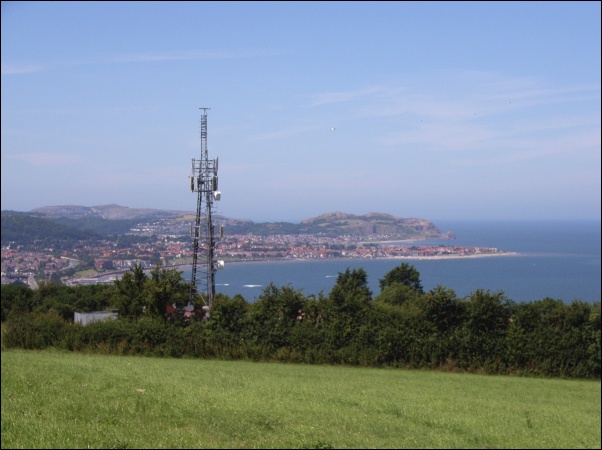 And what a view we have from Penmaen Rhos transmitter (which is a relay of Moel Y Parc). In the middle distance we have Colwyn Bay (the actual bay as opposed to the town), then beyond that Little Orme Head. I think that just over to the left in the distance is The Great Orme, Llandudno would be just hidden from view in front of it. I must confess the picture is slightly out of focus but getting another pic with the sun out and sufficiently clear visibility proved too much when I went all the way back for another try in July 2013. It was sunny but despite the BBC weather forecast saying it’d be “very good visibility” Little Orme was almost invisible on the pictures I took. I realised on a compressed picture the lack of pin sharp focus probably wouldn’t matter anyway, so here is the 2006 original.
Penmaen Rhos transmitter location
Penmaen Rhos transmitter page on MB21 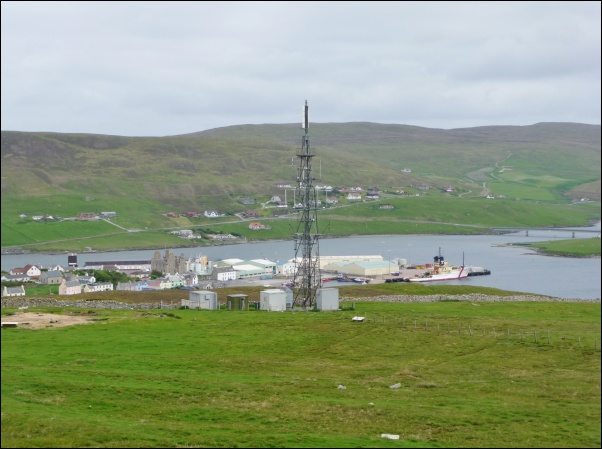 Scalloway transmitter on Shetland is a relay of Bressay (near Lerwick). The mast is perched just above the town and a fabulous view is to be had if you visit it. Scalloway is perhaps most famous for the WWII “Shetland Bus” and there is a museum of the latter in the town. Also visible in the pictures is Scalloway castle and the (ex) Coastguard emergency towing vessel Anglian Prince, These were introduced at strategic points round the UK coast in response to the Braer oil tanker’s sinking in 1993. Unfortunately most, including the Lerwick tug, were withdrawn in 2011 to save money.
They’re friendly people in Shetland, when I mentioned to the farmer’s wife I’d like to get up to the transmitter so could I park my car up anywhere and walk, she said “no need, I’ll open my gate and you can just drive up to it” ! It’s not always like that in England I can tell you……..
Scalloway transmitter location
Scalloway transmitter page on MB21 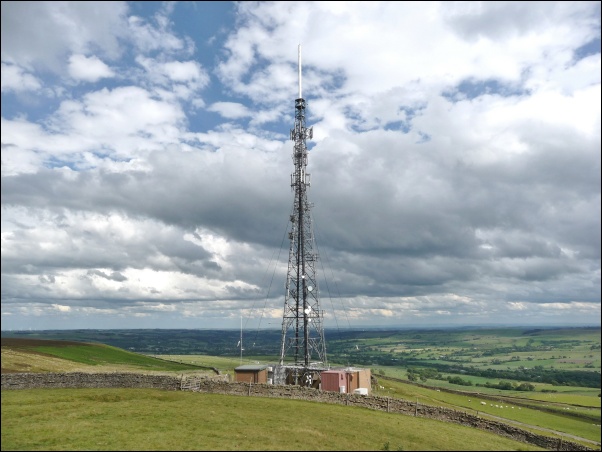 The view from Weardale transmitter (which is a relay of Pontop Pike) must be one of the best in the country. This picture doesn’t really do it justice, but, generally speaking, most views don’t look anywhere near as good on a photo as they do in real life, so get up there, have a look, and see for yourself ! Anyway this shot is taken from just above the transmitter looking ESE towards Bishop Auckland and Middlesborough.
Note the fact that the tower also has stay wires, which usually defines a mast ! A tower is a structure which stays up without stay wires, so is it a tower or a mast ? Does the definition of this structure depend how hard the wind blows ? ! ? Whatever the truth of the matter I think the fact that we have a tower with stay wires indicates that it must be fairly windy up on Fatherley Hill...... Maybe they’ve added extra transmission antennas to the structure, which then increase its wind loading, thus requiring the tower to have stay wires, who knows ?
Weardale transmitter location
Weardale transmitter page on MB21