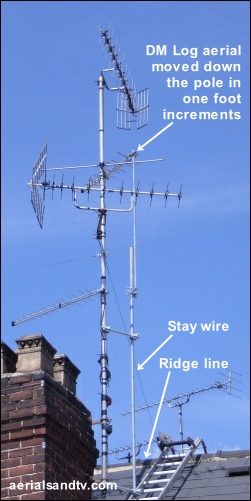 Aerial ridge tests (as in height above or below ! )

How high above a roof line (or other obstruction) does an aerial have to be mounted in order for it to avoid the worst effects of it on reception of the incoming signal ?
With the usual caveats about RF tests, we set up an experiment where a DM Log Periodic aerial was lowered in one foot increments from 10ft above the ridge line, down to two foot beneath it.
The results are shown below in a graph plus (most of the readings) in tabular form, the graph arguably shows the fall off in signal more clearly.
As expected the decrease in signal varies with frequency / wavelength. The largest increase in signal occurs in the first two or three feet above the roof line, then it dips slightly. This coincides fairly closely with the vicinity of the stay wire holding up our semi stayed mast, so that’s the most likely culprit, though when it comes to RF I’m not prepared to say anything for sure....

The peak reading (up to 10ft anyway) was at 7ft after which a slight downward trend was observed. I’m unsure why this occurred. My first guess was the effect of the aerial at the top of the mast, but I feel this is unlikely to be the culprit as even at the very top of the test mast there was still a good two foot gap, and the top antenna is vertically polarised, as opposed to the horizontal polarisation of the test DM Log. A more likely explanation is some sort of “RF dead spot”, but, to be frank, your guess is as good as mine, RF is a black art....

I had always advised aiming for a two or three foot clearance above an obstruction and I was pleased to see my guesstimate was vindicated, but what I didn’t expect was there would be such a huge fall off within 6” of the ridge level. Arguably if you can only get your antenna 6” above the roof line then you may be better off putting it in the loft. The fact the attenuation peaked just below the ridge proves that electromagnetic radiation does indeed travel in straight lines (apart from when its being refracted ! ), but also that, as expected, the roof is thickest there, ridge tiles, roof trusses etc. If we could have gone lower I reckon the signal would have risen a bit more, assuming there wasn’t anything metal in the loft obviously ! 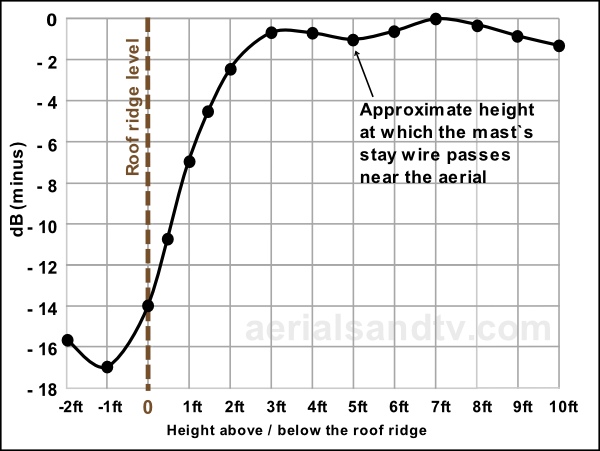 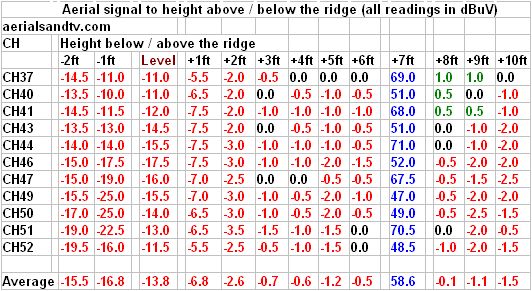 Try to mount an aerial at least two feet, and preferably three feet, above any roof line.

Just how much difference does a longer aerial pole make ? In this experiment (and the others listed at the top of the page) we set out to discover the answer, although it must again be emphasised that these specific results are only applicable to this particular installation. Remember RF is a black art, particularly where an aerial doesn’t have “line of sight” to the transmitter. 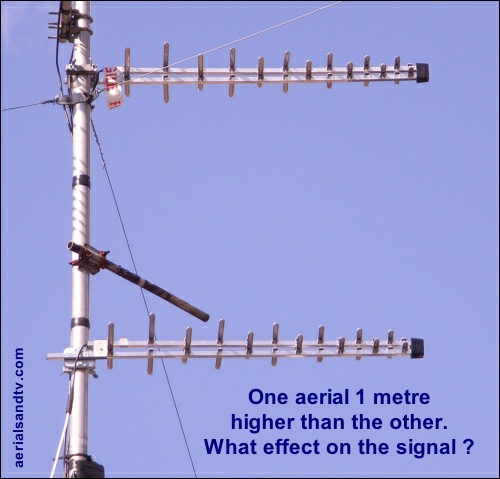 We erected two DM Log aerials 3ft 3in (1m) apart, with the lower one (when aligned on Emley or Belmont) clearing the roof line / ridge by 2ft 8in. There was no ridge in the other direction, towards Sheffield /Crosspool TX. These apparently arbitrary dimensions were governed by lack of access to our mast, it wasn’t easy (or safe) to go any higher without having to dismantle our aerial array !  It should be remembered that the most commonly adopted method of raising an aerials height is to swap from a 6ft pole to a 10ft. Bearing in mind that one then needs a bigger bracket (thus losing some of the additional height) this would normally give a nett increase in height of between 3ft 3in and 3ft 9in, i.e. we’re not actually far out on that one !

For Emley Moor we’re in a medium signal level area (thus we utilise a Log 40* on that transmitter) but for both Belmont and Sheffield / Crosspool the reception is weak. None of the three transmitters gives direct “line of sight” but in this respect Emley is the best, Belmont is in the middle, and Crosspool is the worst. I have not published all of the frequencies for Belmont and Crosspool because some of the readings were too low to be reliable.

*predecessor to the Log36, and. it must be admitted, superior to it. These days we'd probably have fitted a Yagi18K.....

As can be seen in the results table, off Emley Moor the additional 3ft 3in height gave an average increase of 1.7 dB. An increase of this magnitude from the aerial, as opposed to from an amplifier, is significant, particularly from an increase in height of only 3ft 3in.  I was surprised..... Remember, more signal from an aerial gives a higher signal to noise ratio, which is hwat you want, an amp, on the other hand gives a lower signal to noise ratio.
To put 1.7dB into context, that is the kind of increase in the A group you’d get upgrading from a DM Log to a Log36.
However, as the "ridge tests" revealed we had, by sheer chance, put the upper aerial near the “sweet spot”, much higher and the signal actually falls slightly ! Similarly the bottom aerial was just at the height where the ridge on the roof begins to affect the reception. Obviously the differences in gain vary with the frequency and wavelength of the signal(s) but all channels off Emley Moor were up, between 1.1 and 2.5 dB. 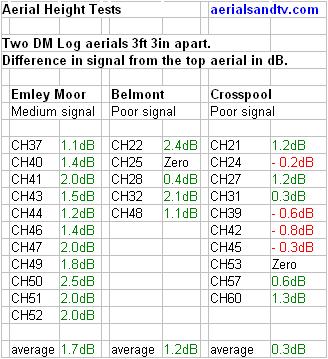 The Belmont results were less consistent than Emley’s, unsurprisingly as “line of sight” is more problematic, i.e. the signal has more chance of being reflected, refracted or even cross polarised. In fact one of the five measured frequencies off Belmont showed no increase at all. Having said that, the average increase was 1.2 dB, which is still worthwhile if you’re really struggling for signal.

As mentioned in the article on the Topography Map there is a hill between us and Crosspool / Sheffield and this was certainly instrumental in the results off this transmitter being the most inconsistent. The thing is that being hidden from the transmitter by high ground is one of the main reasons that people fit taller poles..... Five of the ten measured frequencies off Crosspool were increased and one showed no difference, but four actually decreased ! The average increase was 0.3dB, which is so small as to be unreliable.

I think that it’s reasonable to conclude that in most cases mounting an aerial higher will usually give more signal, but it’s not a certainty by any means and moving it laterally may be just as effective. The latter is particularly true in the case of ghosting/multi path problems. However, unless the additional height is required to clear a roofline (or other obstruction) by at least three feet, then I wouldn’t, generally speaking, expect miracles.
Also see this customer aerial report.