RF TV reception really can be a Black Art

It must be stressed that the test site in question did not have line of sight to the transmitter, and this makes RF even less predictable then usual. Though not usually, I hasten to add, as unpredictable as these test results showed.

These particular tests were originally designed to find the attenuation through a roof, in this case Welsh slate. The plan was to check the signal level on the far side of the roof (from the transmitter), then in the loft, and then finally on the near side of the roof. I then hoped (some hope....) that subtracting the signal levels it would give the attenuation through the roof slates.

Getting an aerial (temporarily) at the same height as one in the loft was not that straight forward, but, at some risk to myself, bolting a 10ft pole (with a DM log aerial mounted on it) to a previously erected ladder seemed to work reasonably well.

I started off taking the readings behind the roof, at the East end of the building, as far away from a line of sight to Crosspool transmitter as possible. Then I worked towards the West end of the house taking readings (at the same height) every two feet. I expected the signal to get much larger when the aerial started clearing the roof line and to be fair it did go up, but no where near as much as it should have done. By the time I got to the West end of the building the aerial was a good 4ft above the roof, yet the signal was only about 2dB up ! ? !
It was dawning on me that the original purpose of these tests was in ashes.
All that bleedin’ effort, for nothing.
I went for my lunch.
Now signal levels can sometimes change for no apparent reason, so I did wonder if they’d still be the same after I’d remotivated myself to continue. When I do aerial tests I always take at least two readings, but in this case I just spot checked the West end and the East end of the house (including plus 1ft, 2ft & 3 ft), and I have to tell you they were exactly as they were before.
I removed the pole and aerial from the ladder and took everything round to the front of the house, that’s the transmitter side of the building, although there are houses in the way on the other side of the road and large trees beyond them (see graphic at bottom of page). I reattached the pole/aerial (at no small risk to myself) to the ladder and tentatively took the readings.
They were lower than they were behind the house........
How can that be ?
I’ll say it again (but louder this time).
HOW CAN THAT BE ? ! ?
Thoroughly demoralised I just took readings at the East end and at the West end (including plus 1, 2 & 3ft), then I called it a day.
What a waste of time.

It was only later that I realised that this was a textbook example (if that’s possible) of RF being a Black Art, so perhaps the time wasn’t wasted after all !

RF is indeed a Black Art...

Note that there is more signal at the back of the house than at the front ! ?
In fact there’s more signal in the loft than at the front of the house !
Obviously the most signal is produced by the aerial on the chimney, it’s a whopping 11.1 dB up. Nett of the splitter (in its downlead) the aerial is about the same gain as a DM Log but installed 9ft higher, however, even that doesn’t have clear line of sight to the transmitter.

Hold on, there’s nothing “obvious” in RF reception 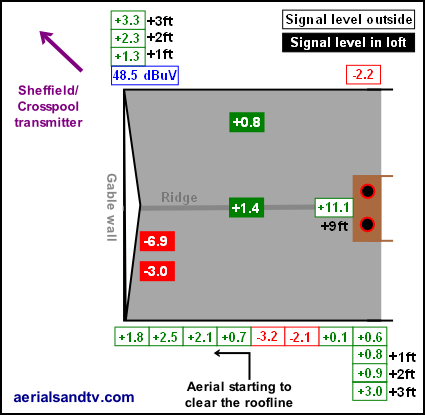 The above figures are the averages for the 11 transmitted channels (at the time it was 5 analogue & 6 digital) from Crosspool. There was even more variation in the signal strengths of the individual frequencies. Just across the back of the house CH27 varied by “only” 5dB (still a significant amount.....), but CHs 45 & 67 varied by a huge 14 dB. Under these sort of circumstances you really should have a lot of sympathy for your aerial installer, or yourself if DIYing !

So how can this be ? Well, whilst I am pretty sure the fact there’s no line of sight to the transmitter is significant, I’ve really no idea. I thought that the most likely cause was diffraction off the roof ridge, but the signals off Crosspool are vertically polarised, so I’d have thought that made that less likely ? The only other thing could be reflection off the houses (or the large tree) behind, but they don’t seem to be in the right plane (see below) to accomplish that. 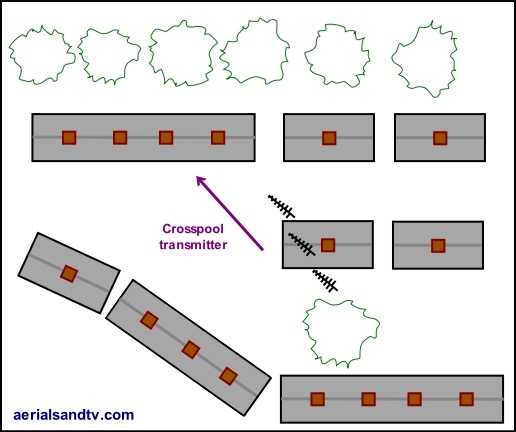 I accept the above scenario is rare, but it exists, you’ve just read it with your own eyes. Actually there is a conclusion, well a sort of conclusion. This test proves the adage that RF is a Black Art and (almost) anything is possible. It also underlines the importance, yet again, of “Line Of Sight” to the transmitter. The fact this site doesn’t have that is, I feel, very significant.