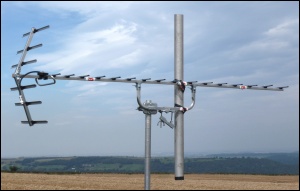 To anyone who has spent any time on this site it may not come as any surprise to hear I rarely just accept what I’m told, by anyone. Thus, when I used to read that aerials installed on the same pole should be separated by 3ft I didn’t accept that either. Quite apart from anything I didn’t see how that could apply for aerials of opposite polarity. Now this is particularly significant because many people install a vertically polarised FM half wave dipole (for FM and DAB reception) on the same mast as their TV aerial (the great majority of the which are horizontally polarised), but FM half wave aerials are 5ft tall so it wouldn’t be easy to separate that from the TV aerial by 3ft !  So, almost as an afterthought, back in summer 2008 when I happened to be up at the test site I played about taping a one inch pole to an aerial in the same and opposite polarities to the dipole/directors. Sure enough if the pole was opposite polarity it had almost no effect on the signal received by the TV aerial but if the polarity was the same then around 3dB was knocked off.

The original experiments were all very well but since then I’ve frequently wondered, and in fact frequently been asked by customers, if the same minimal effect (at opposite polarities) would apply to a 2" diameter pole as opposed to a 1"pole, or indeed an FM half wave at only half an inch in diameter. Furthermore, originally, I didn’t spend much time researching the drop off in the attenuating effect as the pole was moved further away from the dipole and lastly, because the tests were just a quick afterthought, I only used an A group aerial on the A group frequencies.
So, the stage was set, and in September 2012 (after much planning ! ) I really went to town on it.
I used a 3ft section of 1" pole and a 3ft section of 2" pole, both of which were tested at same and opposite polarities and at 3 points along the aerial, namely between the 3 & 4th director, the 9 & 10th, and the 13 & 14th. I say along the aerial, I actually used 2 aerials, a Yagi18A for the A group frequencies and a Yagi18E for the B and C/D group frequencies. 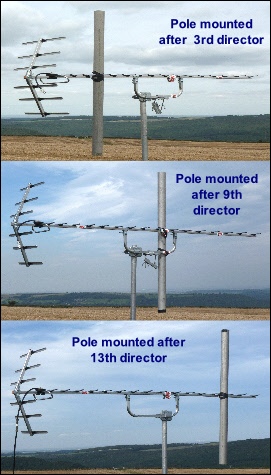 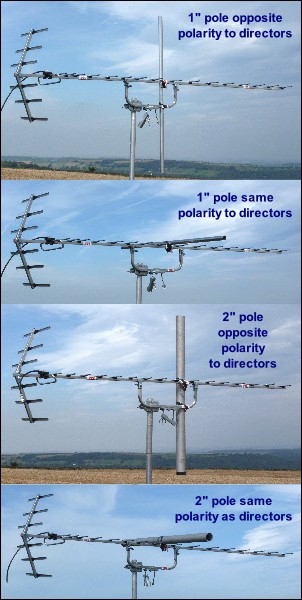 Well, I have to tell you, due to the Black Art nature of RF, it’s rare indeed to get such a consistent set of results !
The only slight anomaly is the opposite polarity 1" pole lost more signal between the 9 & 10th director than it did when closer to the dipole between the 3 and 4th, and no, I don’t know why, one could speculate endlessly. It’s only 0.3dB, which really isn’t that much, but it is an average over 27 frequencies, so that’s a bit more significant.
I did a few tests on vertical polarity transmitters and unsurprisingly they broadly followed the same trends.
To put the losses in the above table into context 3 dB is about 40% more (or less) signal, and that is more than the difference in gain between a Yagi 18A and big XB16A.
It was quite a relief to report that the results of the original tests were supported here, so I haven’t been giving out misleading information between then and now !

Opposite polarity obstructions hardly affect the signal at all, though the 2" pole affects it more than the 1".

Same polarity obstructions affect the signal significantly, again the 2" pole affects it more than the 1".

As the obstruction is moved further along the aerial (away from the dipole) the effect of any obstruction reduces.

The difference in effect as the frequency increases isn’t consistent with the 1" pole, but it’s not that significant either. With the 2" pole, particularly near the dipole, there tends to be a bigger drop off in signal as the frequency rises, but we’re talking less than a dB at most.
Note that in these tests the obstruction was in line with the directors, whereas if a vertically polarised aerial is mounted on a (vertical) pole using a cradle the mast would not actually be directly in the line with the elements. I would be the first to admit that having the pole a few inches to the side may very well have a negative effect on the signal, but I cannot imagine it'd be as much as in these tests. And no, I'm not really tempted to repeat all these tests to find out just how much less significant it is !

Notwithstanding the above results, I still wouldn’t place an obstruction (e.g. an FM dipole) actually through the elements of an aerial if I had any choice in the matter, for aesthetic reasons apart from anything else !