All Black Hill's CHs stayed the same during the 700MHz clearance in Sept 2018.

Black Hill television transmitter was first opened in 1957 but the first mast was 230m high (see How High is High? ) and was replaced by a higher structure in 1961, the original was moved to Selkirk and is still in use. That 307m mast was itself replaced (between 2008 and 2010) by a new mast as the 1961 structure was deemed insufficiently robust to carry all the transmission antennas now required on it.

The transmitter has the fifth highest population coverage of any TV transmitter at around 2.5 million and it is located 14 miles East of Glasgow (for the sake of impartiality, that's about 25 miles West of Edinburgh! ). Most people in Glasgow, Coatbridge, East Kilbride, Motherwell and Paisley receive their transmissions from Black Hill, but there are those in Stirling and even in Edinburgh who also use Black Hill (rather than Edinburgh's more usual transmitter Craigkelly) if the local terrain or other buildings mean the line of sight is better.

For the most up to date MUX to channel allocations etc put this postcode ML7 4NZ into the Freeview checker.
Also see Scottish Central region Freeview transmitters. 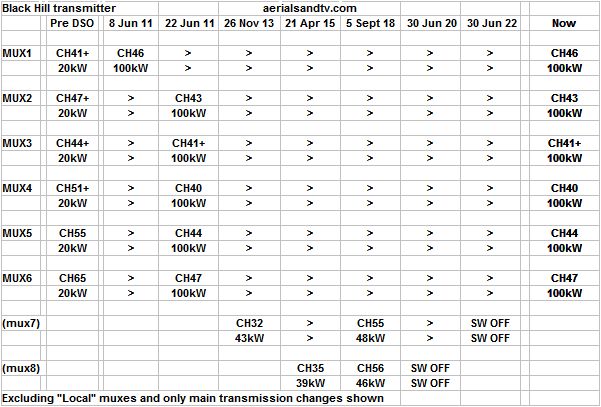 Black Hill is horizontally polarised. It was originally a B group for analogue, then temporarily became an E group (or wideband) whilst transmitting both analogue and digital, before reverting back to a B group at switchover in 2011.

Black Hill is a main transmitter and it has sixty four (including Torosay's twenty two) smaller repeaters to improve coverage in poor reception areas within its coverage area.

There is one "Local" channel allocated to Black Hill, CH30, this is mainly used for a local Glasgow TV channel. This channel can be picked up by all decent B group aerials.

Those in poor reception areas, can take advantage of the superior performance of a B group aerial over a wideband. If you really need a "high gain" aerial (and most people don't) a decent B group aerial should be used. On the other hand if the signal is strong (or medium) then, by definition, it doesn't need a "high gain" antenna anyway ! Under these circumstances a Log Periodic should be fitted instead.   See Black Hill's graph. 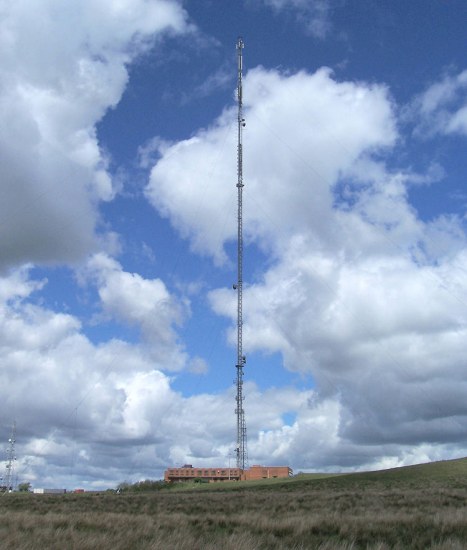 Black Hill transmitter : graph of its transmissions against the gain curves of the aerials we recommend for it 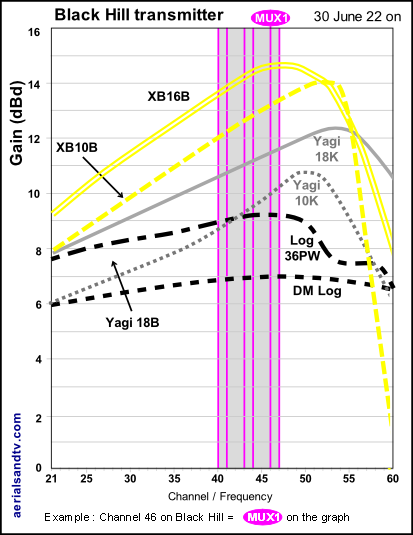 Black Hill’s channels in relation to the UHF TV band and the gain curves of the aerials we recommend for it.

For the most up to date MUX to channel allocations etc put this postcode ML7 4NZ into the Freeview checker.
Also see Scottish Central region Freeview transmitters.

The guide below also includes the same information for other potentially co-receivable transmitters within Black Hills coverage area, namely Craigkelly, Angus, Torosay, Rosneath, Darvel, Caldbeck, Selkirk, and Chatton. The Channel Allocation Guides can be very useful in the diagnosis of co-channel interference problems and can also be invaluable if you are trying to find a spare channel for a modulated output (e.g. for a Sky box or CCTV system) to be added to your TV setup/distribution system without suffering from co-channel.

I suspect that Caldbeck may well have a restricted radiation pattern in a Northerly direction and that “Caldbeck Scotland” will act as a supplementary transmitter (on different frequencies) only transmitting in this direction. 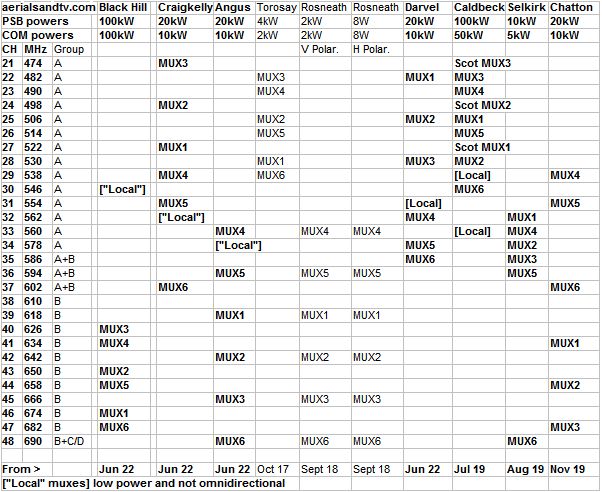