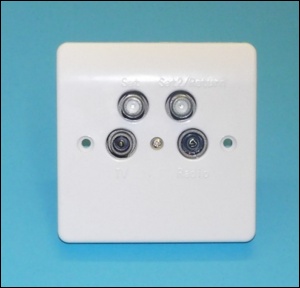 Surface plate, wall plate or outlet plate, they’re all the same thing. If one is used in your system make sure they’re quality screened non-isolated types (like the ones on this page). This is particularly the case if a PSU / Mast Head amp or IR return path amp (Sky Digi Link) is used in the system, but also if the site is in a poor reception area or prone to electrical interference. The high power 4G/5G transmissions make good screening even more important, be warned !

Cheap unscreened faceplates can be especially problematic, in fact only bodgers use them, or even sell them.......
ATV only sell screened non isolated wall plates.
NOTE : I have seen some “quality” screened plates (even some MK…) which are unscreened, and it’s sometimes difficult to tell from the brochure as they often only show the front !

When using a wallplate the extra join in the downlead that is required  is unwelcome (though not that significant) but the cable is often "kinked" [at the point where it is attached to the PCB at the rear of the plate] and this is bad practice from the RF point of view, so try to route the cable like the one below left and not like the other one. The capacitors in isolated wall plates, particularly 'budget' types, can also cause significant signal loss, personally I wouldn’t normally recommend isolated TV outlet plates, not for domestic installations anyway.

Wall plates can be useful for having built in diplexers (though not splitters.....) but also for looping across to an alternative TV point though !

Screened surface plates are deeper than unscreened types so make sure you fit a pattress box of sufficient depth. If retro fitting to an existing shallow pattress box then we sell spacer plates to gain an extra 12mm depth. They can also be useful if you want to increase the clearance behind a surface plate so as to ease a kinked cable.  Remember that a “retro fitted” surface plate / wall plate isn’t going to be neatly flush fitting (not unless you chisel out the wall.......) and a decent screened plate will require a pattress box sticking out about an inch. We have had customers complaining of poor signal or intermittent interference who have gained significant  improvements by upgrading the wall plate or simply bypassing it. 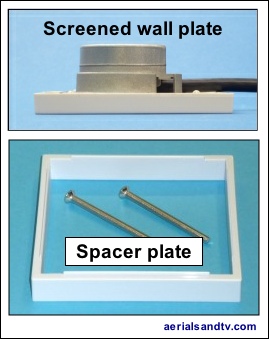 How to bypass a cheapo wall plate : unscrew the plate from the wall and check if you have a bit of slack in the Co-Ax leading to the rear of the plate, don’t pull it too hard though !  If you have enough spare cable, detach it and then unscrew the PCB from the back of the surface plate. Now throw it in the bin. Gently pull some of the downlead out and push it through the hole which you have just exposed in the plate. Replace the plate on the wall and attach a Co-Ax plug to the stub of cable, then join an extension to this. Alternatively replace the plate with a decent screened non isolated type (like this one) or get rid of it altogether and just have the cable coming through the wall with a hole tidy on it to make it look neat !

Bypassing a budget type isolated surface plate gave an increase in signal of nearly 2 dB on average ! To put that into context that’s almost as much as the increase in signal you would get by swapping from a Log 36 (a medium gain aerial) to a DY14WB (a high gain aerial). Furthermore the elimination of the surface plate also gave a huge improvement to C4 Teletext (remember that ? ) which had always been problematic at this location. The gain in signal level cannot have been due to a decrease in the number of “connections” because the plate (one connection) had actually been replaced by two, i.e. Plug > Back to Back coupler > Plug. The fact that the surface plate was an isolated type was very significant because when the isolating capacitors (which were 3nF at 3kV) were shorted out most (but not all) of the attenuation disappeared.

Remember that you cannot pass the DC voltage required by a mast head amp (or the digilink IR return supply voltage) through an isolated plate.

On the other hand isolated wall plates can be useful to prevent line power corrosion issues (if you have an amplifier in your system with a line power facility which is not being used), but you can just use an in line DC blocker anyway !

Why have I got 2 cables running to my wall plate ?

If you mean you've got one cable coming in from one side (from the aerial) and another going off somewhere else, well your system has been bodged…. The installer has daisy chained your TV outlets or put them in series (or is it in parallel, it depends on your definitions! ) but whatever description you want to use he's done it wrong. That isn't to say it won't work, to a greater or lesser extent (bodgers are notoriously flukey), but it's not the correct way to do it.
Why not ?
Well for a start the plate in the pictured bodge isn't screened, thus increasing the chances of interference affecting your signal. The other thing is that the “split” (because that's effectively what it is) isn't impedance matched.
And here's why daisy chaining wall plates is a bad idea.
So how should it be done?
The problem is that nobody (as far as we know) manufactures a wall plate with a built in splitter (or tap), so one way or the other you have to fit one. If you've got room in the pattress box behind the plate you could try fitting a two way splitter (or one way tap) though you should try to avoid kinking the cable so that's not an easy operation……. An external 2 way splitter (it can be removed from the weatherproof enclosure) has all the connections on the same side which may, or may not, help !
An alternative approach is to use a double outlet wall plate, a plug in splitter and a jump lead as in the pictures below. This is arguably a more flexible method, but you must remember that if the splitter or jump lead is disconnected then the TV outlet further down the system won't get any signal ! 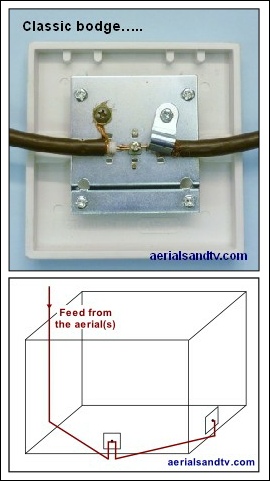 Wiring up a screened CoAx plate

NOTE : As of September 2021 we stock a different plate with a "low profile" screening can (of 16mm depth) and the wiring up instructions for that are printed on each plate. But we have left this article on the wise for reference.

Trim back the cable as in the picture, arrange the outer braiding along the top and bottom of the cable so as to maximise contact with the screening can. If using a spacer plate feed the cable through it now !  Undo the rear screening plate/clamp and hinge it upwards, note the fibre washers on the screws, their  function is to stop the screws falling out (and being lost in your deep pile carpet….). Insert the centre core through the screw post and tighten, not too much that you screw straight through the wire..... Shut the screening door and tighten the two screws, try not to overtighten and crush the cable excessively.
Note, if short of clearance in the mounting box (due to the screening can requiring more clearance) then spacer plates are available.

Remove the screened triplexer (or Quad plate) can from the face plate, noting which way round it was ! Remove the clamp bar and slacken off the screw in the right hand socket (left if viewed from the back), the left socket is unused (apart from in the Quad plate). Trim the cable as in the picture and arrange the outer braid underneath so as to make maximum connection with the can. If using a spacer plate feed the cable through it now !
Insert the centre core as far as it will go into the socket then fully tighten the screw, though do not overtighten. Replace the clamp bar and tighten down onto the cable, not so far that it crushes it flat. The clamp will end up at a slight angle, but that is OK. Replace the can on the surface plate, ensuring it’s the right way round !  The TV outlet is the male, and yes  I agree with you, that’s stupid, but that’s how they’ve been designed !

Note, if short of clearance in the mounting box (due to the screening can requiring more clearance) then spacer plates are available.

NOTE : These instructions do not apply to Proception diplexed plates. However, they are even easier to wire up and cable stripping dimensions are provided on the rear of each plate. 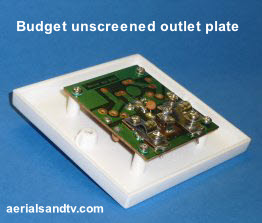 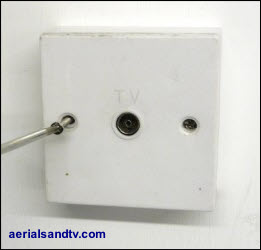 Carefully remove screws, then withdraw plate from its mounting. 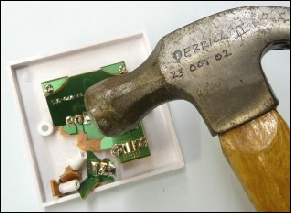 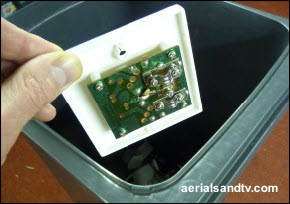 If Derrick is unavailable, gently toss crappy surface plate into the biggest deepest bin you can find,
then have the bin emptied as soon as possible.
Now go and buy a decent plate, and fit it as per the instructions.

NOTE : I have seen some “quality” screened plates (even some MK ones…) which are unscreened, and it’s sometimes difficult to tell from the brochure as they often only show the front ! 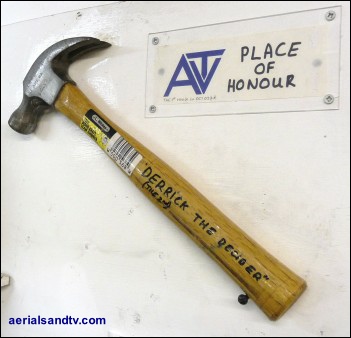 Derrick is a valued member of staff whose decisions are always correct and final.
Well, final anyway.
His original job was to decide whether or not we should continue spending time trying to repair any recalcitrant recon TV (for sale). If the set was taking up far too much time and still not repaired, we’d ask Derrick whether we should spend any longer on it.
He was very decisive.
Derrick must have saved us hundreds of hours in labour over the years, thus he has a place of honour on our wall.
Such is Derrick’s renown that he has turned from a noun into a verb, like Hoover.  If something requires despatching we say “I’m going to Derrick it”, then, after the deed, “it’s been Derricked”.

* Derrick is the second person to hold the title. Derrick the 1st perished whilst deciding whether we should spend any more time trying to repair a Hitachi TV, that was way back on the 23rd of October 2002 AD. It was particularly poignant because he was so young, only 20 months old in fact.
Tragic.
Still, the king is dead, long live the king.
Derrick the 2nd, truly the king of the hammers.
Vivat Rex !