Answer to the Conway conundrum from page 1

Answer to The Conwy Conundrum (from article on Cowboys’ Locker page 1) : Well, apart from being a cheap Contract aerial on a steel pole, it’s a C/D group aerial on (what was at the time) a B group transmitter ! It’d probably work OK in a strong signal area, but I’m unconvinced that an aerial pointing through Edward The First’s 13th century town walls would fall into the latter category. That and the fact that it’s a Contract aerial and their gain curves can be inconsistent. I can’t help thinking that the C/D group aerial was meant for Winter Hill (which was a C/D at that time) but was put up by someone who didn’t really know what they were doing. Winter Hill is used by a fair number of people on the North coast of Wales, but aerials on it from Conway would be facing ENE (towards Llandudno Junction) and they'd be polarised horizontally. 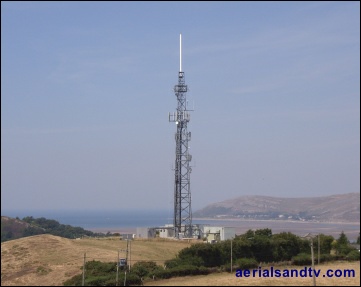 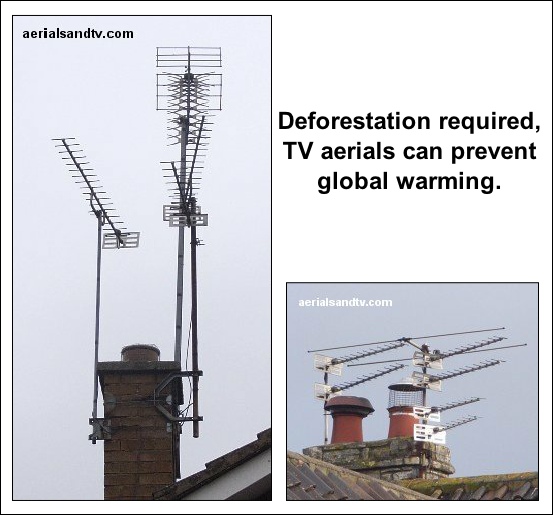 Now I know I am a bit of an environmentalist (nothing too extreme) but these two pictures do prove that sometimes deforestation can be beneficial.
It’s like the Amazon up there (that's the forest, not the "Pacman" like Online retailer specialising in paying as little tax as possible), I don’t know about you but I can’t even tell where one antenna ends and the next one starts ! What’s more the wind loading on that relatively small chimney looks distinctly worrying.
It’s all so unnecessary, may I suggest investment in an amp or splitter and/or a diplexer ?

Remember, aerials are not like trees, they do not absorb Carbon Dioxide !

ATV Cowboys' Locker : What a waste of directors 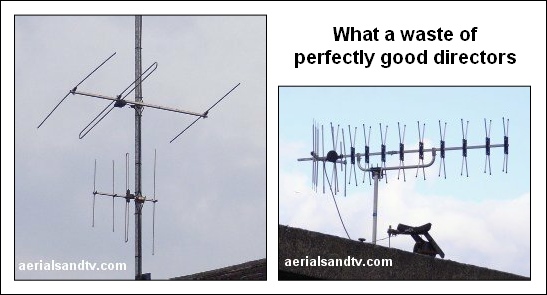 The picture on the right shows a horizontally polarised FM aerial and below it a vertically polarised DAB antenna. The problem is with the DAB in that the pole is situated in line between the dipole and the reflector. The whole tuning of the aerial must have been affected and whilst the thing may still work (if it’s in a strong signal area) the fact is that the multi element design is completely wasted. Just a dipole would have worked as well and possibly even better!

Whenever you install an aerial (including more than one aerial on the same pole) the single most important factor is that nothing* is placed in line between the reflector, the dipole and the elements of the aerial, or indeed the path to the actual transmitter !

* This include’s the aerials own mounting cradle, as shown in the other picture. We were amazed at the fall off in signal which occurred, on our Belmont aerial, when we mounted the cradle incorrectly (i.e. parallel) with the directors, like this one, see our test of this bodge. In the case of multiple aerials on same mast, if they are of opposite polarities they can usually be mounted within 6 inches of each other, or even less. In fact when we tested a horizontal TV aerial, with a vertical pole actually through its elements, there was no detectable fall off in signal....... Not that I’m advocating it, unless it’s absolutely necessary !
On the other hand if the aerials are of the same polarity, I’d try and separate them by two or three foot, just to be on the safe side. 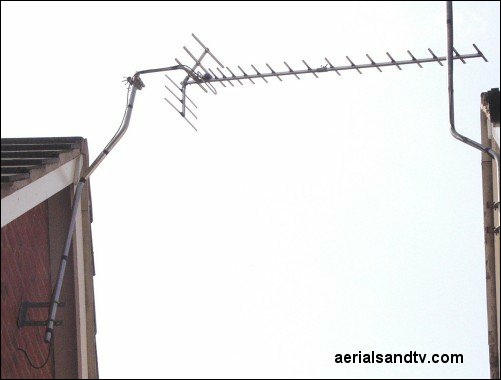 When I first saw this installation I thought it was one of the worst I’d ever seen. The aerial’s cradle is fitted in a way I never even thought possible and the cranked pole is fitted upside down and therefore not even fulfilling it’s major justification for existence, i.e. to clear an overhead obstruction (like the one just visible on the right of the picture)
But then the penny dropped and I realised that this was just another example of a little knowledge being a dangerous thing. Clearly the chap had read somewhere that the closer you are to the transmitter the stronger the signal is. Thus he’d decided to use the cradle in this imaginative fashion, and also utilised a cranked pole, in order to move the aerial just that bit nearer to Emley Moor. The result is that the aerial is now situated just 13 miles 1759 yards from the transmitter rather than the full 14 miles. [link]

ATV Cowboys' Locker : The much anticipated convergence of telecoms and TV 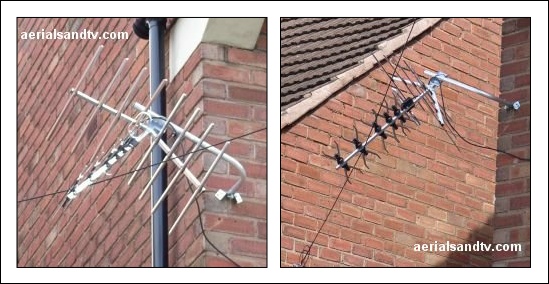 I’ve heard that some people are predicting the convergence of Television and Telecoms but surely this is ridiculous. I accept that the telephone cable is actually contributing to the chaps television (by preventing the install tipping over even more....) but does that really count as the merging of the two industries in quite the manner anticipated ?

This install really is an “Argos Special” isn’t it ? Note the mounting hardware. We do actually sell these (though to be fair ours are probably better quality than this one...) but we would only recommend them for a loft mounted antenna, and the above picture vividly illustrates why.
The chap could also have invested in some wall clips for the cable, and if he was feeling really flush maybe even some decent insulation tape to secure the cable to the pole, but the absolute crowning magnificence of this install is the fact the “element bays” haven’t even been folded into their upright positions ! That said, this type of aerial is one of the many ”Bacofoil” type X Beams and maybe the bloke who put it up realised that when he accidentally breathed on an element, and it bent. Thus he thought (quite rightly) that keeping the thing folded up would keep its wind loading to a minimum, though that would only apply before it rotated to diagonal polarity....... 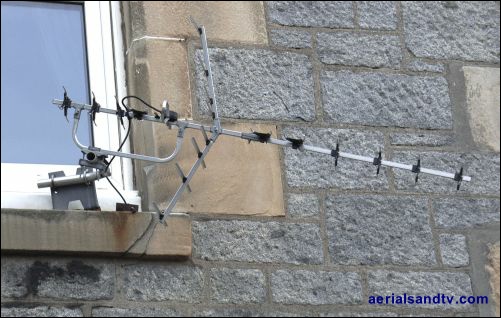 Sometimes, mere words are totally inadequate (and it’s on a vertically polarised TX……).

Also see You’ve Only Got To Look At All The Others..... 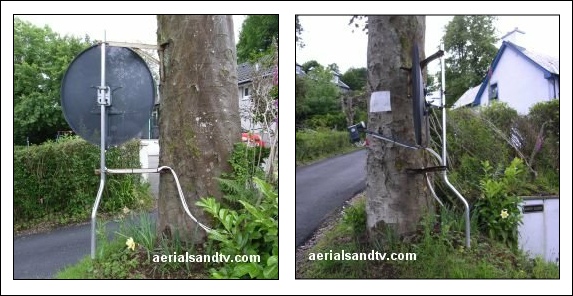 I can understand why someone would not want an ugly satellite dish on front of his (or her) house but don’t they realise that putting it on a tree outside - at ground level - just makes it even more conspicuous......
Seriously though, I appreciate that if there are trees around one may have to use ingenuity to find a clear view of the satellite or (to a lesser extent) TV transmitter. But surely the installer could have cut off the bottom of the cranked pole ! Unless of course it’s been deliberately left there to make realigning of the dish easier, who needs a motorised satellite ? Just crank the handle ?
Whilst we’re at it, do black cable ties go with white cable (remember this is outside the front of some ones house don’t forget) and couldn’t they have used galvanised T & Ks ? 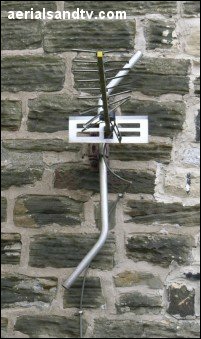 When I stumbled upon this install I was in a quandry as to what I was looking at.
Was it simply a case of “Hacksawitus” * ?
Or was it something far more sinister .........
I couldn’t help but feel an involuntary shiver of unease rise up my spine. Could this actually be a malevolent sign to worshippers of the occult that a kindred spirit lurked within these foreboding walls ? Would the Devil himself (or, failing that, Rupert Murdoch) be welcomed through this portal to a malignant hinterland.......

* Hacksawitus = A rare and, so far, untreatable condition, literally translated as “fear of the hacksaw”.
The latest medical opinion is that gene therapy provides the best hope of a cure and this is quite appropriate as it involves cutting. The severed lengths of DNA would then manipulated into a different order to effect a cure.
Dr Yarman has informed me that technically speaking it should be Hacksawphobia not Hacksawitus. Apparently the latter’s suffix actually means "inflammation of".
However, Hacksawitus sounds funnier, and that, without any doubt, is what’s most important. [link] 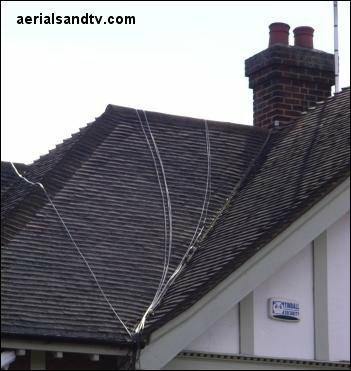 This is the roof of a pub just North of London. I don’t know who installed these cables but they’ve obviously never heard of wind, or friction, or sandpaper, or indeed of the concept of “neatness”.
Shall we start a sweepstake on which cable will wear through first and start leaking rain water into the TV ?
I’m going for the one on the left, but who knows ?

I did wonder if the installer had been drinking an excess of “Cabling Black Label”.
(joke courtesy of Pat, one of his better ones, in fact, now I come to think about it, his only good one......) 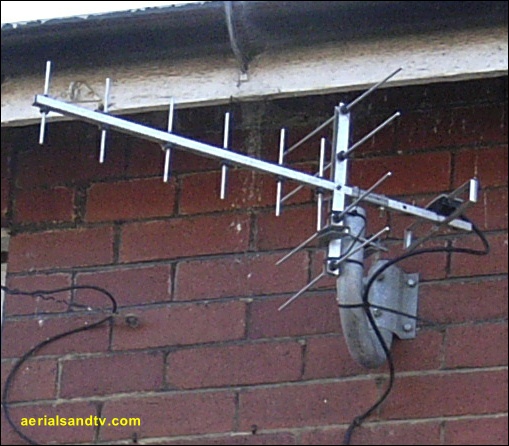 This install is a disaster area. The directors are incorrectly polarised for the reflector and the dipole (see parts of a Yagi aerial). Incredibly the latter is mounted behind the reflector, and it’s also upside down, which will not affect its performance but (on this model of aerial) will enable it to fill with water. Oh, and it’s not even pointing at the transmitter (Emley Moor), it’s about 30 degrees out.......
But what is so infuriating is that, because Emley is only about 6 miles away, straight across the valley and he’s probably getting a bleedin’ perfect picture…. How come these bodgers are so very, very, very
flukey ! ! !