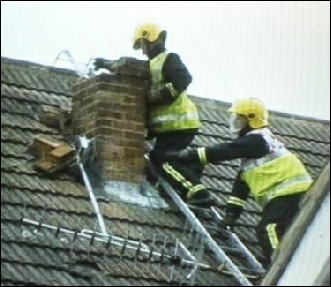 This Health & Safety Bollox has gone a bit far hasn’t it ?
Are they now saying you need to use firemen to put up aerials ?
And two of them at that ?
Should put up the cost of the average install a bit, a grand maybe ?

This install was blown down in a gale and the pictures made it onto the TV news.
I tried to get a decent copy of the picture from the BBC.
Their reply was “buggar off time waster”.
Or words to that effect.
I thought hang on a minute, something’s not right here, I pay my licence fee, so I’m paying their bleedin’ wages !
Didn’t make any difference.
I said I’d just take a picture of the still frame off the TV recording, then use that.
They said “you can't it's copyrighted”.
This time it was me who said “buggar off”, what goes around comes around. I’ll put it on anyway.
So I’m risking prosecution by the BBC for you lot out there, I hope you’re sufficiently grateful.
I’ll bet you’re not.
Gits.

Actually we can learn from this picture, I mean apart from the fact the BBC should know which side their bread is buttered. That chimney install has bought down half the chimney with it. It’s done this for one of three reasons.

1 - The bracket was a wall type and it’s ripped out the bricks, thus bringing down the chimney.

2 - The bracket was a small 6” type, which is a bit small for an aerial of that size on a 6ft pole. I’d only use a 6” chimney bracket for a 3ft pole, or a very small aerial on a 6ft pole. A 6” chimney bracket can crack off the corners of the bricks (it only covers two courses don’t forget) and in extreme cases can rip them out. An 8” mitre type bracket is much stronger because it not only spreads the load over 3 courses of bricks but wraps right round the corner of the stack.

3 - The bracket was put on the top courses of bricks, which have no weight on them and are thus pretty weak. A chimney bracket should never be wrapped around the top few courses of brick, particularly with 6ft poles or larger aerials. Having said that one sees installs like that all the time, as I frequently say, how come these bodgers are so bleedin’ flukey ? If it was you or I who did that it’d crack the brick off the first time there was a strong wind ! 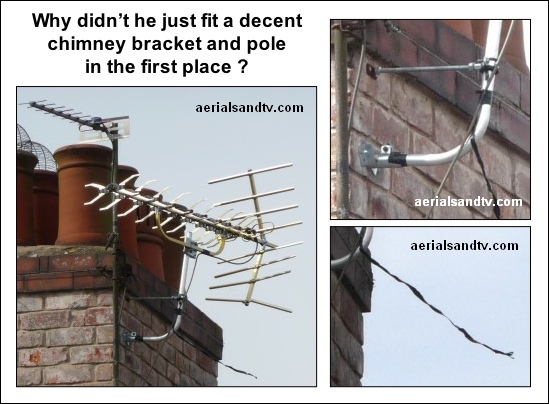 I don’t know whether to give this chap a bit of credit, or not.......
He’s bought an aerial kit from Argos comprising a Bacofoil aerial and a loft kit. To be fair Argos, or whoever, don’t let on that it’s a loft kit, they just call it an installation kit. Arguably those SLX / Labgear / Philex aerials are also “loft aerials” because they’re insufficiently rugged for mounting outside, you know, where there’s air movement, and birds.

When the chap has come to install it he’s realised it’s a load of crap so he’s tried strengthening it. Does he get credit for trying to make it stronger ?
Or does he get opprobrium ?
Now, you really wouldn’t have to spend much time on this web site to pick up on the fact that I’m partial to a bit of piss taking.......

So which way do you think I’ll play this one ?

You guessed right.
Bleedin’ bodger.
Why ?
Let’s face it he hasn’t even got the excuse of ignorance, his strengthening proves he knows it’s crap, but he’s fitted it anyway. He should have took the stuff straight back and obtained some quality kit instead.
Quite apart from anything else the strut he’s taken a great deal of trouble and ingenuity to add is only going to be effective perpendicular to the wall, it’ll do precisely sweet FA in the "side to side" direction. The only thing this install has going for it is that it’s so weak that a high wind is unlikely to pull the brick out of the stack because the crappy 1” pole would bend first and/or the little wall screws he’s used would just pull out.....

And why didn’t he use some decent insulation tape ?
Doesn’t he know there’s decent tape, like we sell, and crap. Look on the bright side, he’s probably saved about 75p and it’ll only take half an hour to get back up there and replace it, every year that is........

"Right, OK, your site’s quite interesting, in a 'hard to stop looking at' sort of way, but, to be honest, I’m a bit sick of all these pictures of aerial installations. Can we have a picture of something else ?"
Well thanks for that compliment, I’ll take it as one anyway, we always listen to our customers, so if you don’t want any more pictures of aerial installations, we’ll oblige : 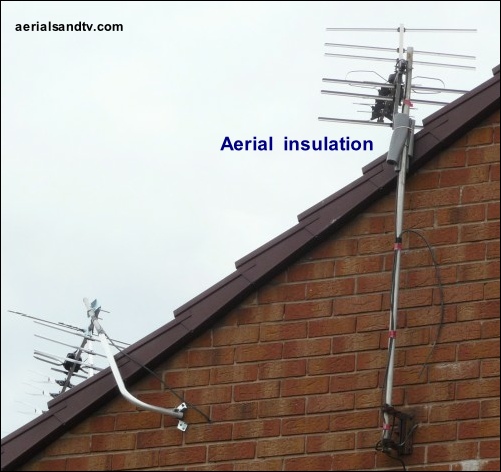 I’ll be honest when I took this picture (it’s in Pentre Broughton near Wrexham) I thought it was just another shot of crappy Bacofoil aerials, one of which was installed on a loft kit.....
It was only when I looked at the picture back home that I realised it was actually a picture of an aerial insulation, the first I’ve ever seen in fact.
I assume Bertie has actually installed this aerial insulation to stop the pole banging and scraping on his fascia whenever the wind blows. Now if the chap had taken our advice he’d have left a 2" gap between the pole and the fascia. Actually, if he’d have taken our advice he’d have installed a decent aerial, on a decent pole, with a galvanised bracket etc etc (you get the picture), but I digress. Personally I’d have bitten the bullet and fitted a larger bracket and, possibly a sturdier pole (which wouldn’t flex as much), but some people are so tight they’d rather save a few quid.
Still, maybe his insulation keeps his installation warm ? That is to say it's installation insulation. Perhaps he’s in the RSPCA ?
[link] 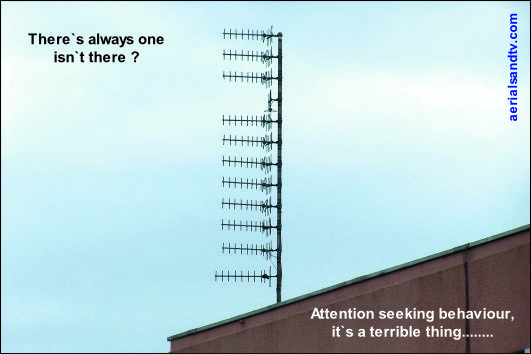 Picture sent in by Andy Silience. 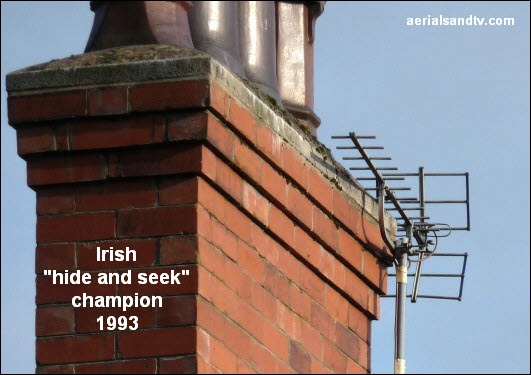 I say Old Bean, have you never heard of a cranked pole ?

Note for our Irish readers, please substitute the following : 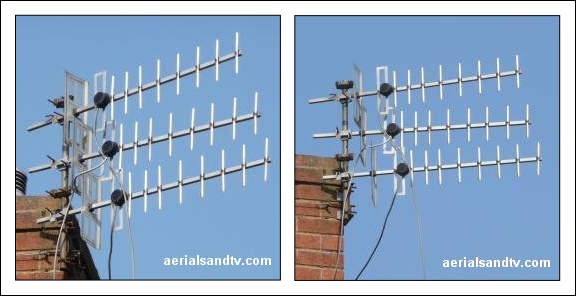 One assumes this was put up by an aerial installer with no knowledge of building ?
Or should that just be no knowledge ?
Or even just no brain ?
To be fair to the bodger it has actually managed to stay up for a good few years (such is bodgers luck) but come on, surely anyone with the remotest knowledge of building would think the above was highly dubious. Just think of the sideways force on that wire, and that’s without the fact there’s a pole with an aerial lashed to the whole caboodle. And those chimney pots are heavy so one did break off and fall on someone it could be Goodnight Vienna, and a big claim for damages. Now I’m not usually in favour of the “compensation culture” but anyone who had a chimney pot dropped on their head would deserve everything got. The first thing they could buy would be some stack shoes (get it….) to make up for the bit of height they’ve just lost courtesy of our bodger.
Picture courtesy of M Rowe 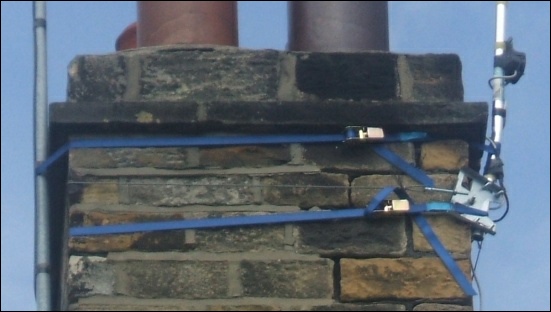 When I first saw this picture I thought the house owner was using the tie down straps to hold the chimney together. This is not as stupid as it seems, if you’ve got a chimney with dodgy mortar then (as an emergency short term measure) using tie down straps is a good idea to hold it all together till it can be properly repaired. In fact I once used just a chimney bracket and lash kit (i.e. without a pole or aerial on it ! ) to achieve just this aim. In fact an aerial installed with a lash wire does actually strengthen the chimney and it’s worth using this argument if you ever get a neighbour complaining about having an aerial on a shared chimney !
But, then I looked a bit closer, and saw that in actual fact the bodger had used tie down straps to hold up an aerial installation which was falling down because the original chimney bracket is arguably too small. Now, who would go to all the trouble to climb up onto the roof and fit two tie down straps round his aerial install when it doesn’t actually cost that much more to buy and fit the correct bracket, namely an 8 inch mitre (and while he was up there he could fit a decent pole as well, that’s a one inch pole……) because he’ll have to go back up there again to do it anyway !
Picture courtesy of T Stoker

ATV Cowboys' Locker : Only the lonely 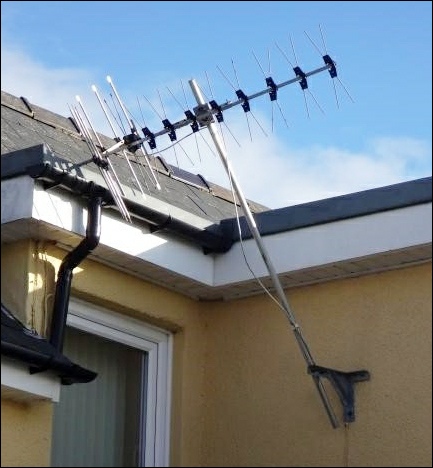 Nah then, what’s this ?
Is it an aerial aimed right up to the top of a tall adjacent transmitter ?
Is it because the installer got mixed up and thought it was a satellite dish ?
Is it because the installer didn’t have a cranked pole to get it round the fascia ?
Or is it because it’s on a pub and not on a cafe ?
How’s that then ?
Well, if it’d been on a cafe they’d know about Ts……..
Oh Dear.
Well you didn’t pay to get in here, so what do you expect.