A.T.V. Poles, Brackets, Clamps & AerialsEstablished 1994
ATV Home » Knowledge » Cowboys’ Locker (awful aerial installations) » You’ve only got to look at all the others

You've only got to look at all the others

Even Bacofoil aerials come with instructions, in fact, because they’re aimed at DIYers who, the manufacturers assume, don’t know anything about aerials, they’re actually more likely to come with instructions. It’s that very ignorance that said manufacturers rely on to sell products which are, well, made of Bacofoil. Anyway, the fact instructions are supplied means that some of the chaps who’ve put together the aerials below really have no excuse whatsoever, although they don’t actually have any excuse whatsoever anyway, because, well you can guess it from the title of this page.

But all this observing, it takes sooo much effort. 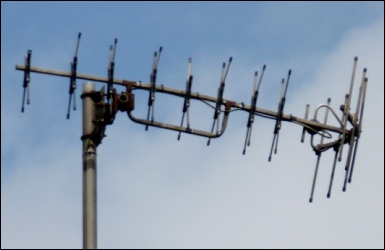 Entrants in this particular competition are marked (out of 5 stars) on :

There are bonus marks if the install as a whole is a disaster area, but that’s not really the point of this page, see Cowboys’ Locker for that.

All pictures are of genuine installs, we have zero tolerance for fake photos !

You've only got to look at all the others : Victory reflector

An absolute gem to start us off, I’ve only ever seen one of these, ever.
Ironically, it may well work fine, but one cannot help but marvel that the sheer creativity of the human mind is a truly wondrous thing to behold.......

You've only got to look at all the others : Reflector, directors & dipole confusion

Oh dear, what have we here ?
This disaster area actually only gets 4 RV stars because, surprisingly, nay, incredibly, I have actually seen a few installs with the dipole behind the reflector. The fact the dipole is opposite polarity to the directors is also not unique, always remember, you can’t educate pork......
However, the fact the chap has managed to get the dipole the same polarity as the reflector should knock quite a bit off the signal…..
This install gets bonus IQ stars. Ladies & Gentlemen, may I introduce to you, a FIVE star install no less ! ! ! Why ? Because the chap is so tight. To avoid buying a wall bracket he just screwed the pole straight to the wall ! I’d have thought the side to side strength would be minimal, but worse, the pole almost touches the fascia, no 2” gap for our mate. No way. This guy works in thou*.

* Thousandth of an inch (for those who don’t know)

You've only got to look at all the others : Not all aerial components are the same 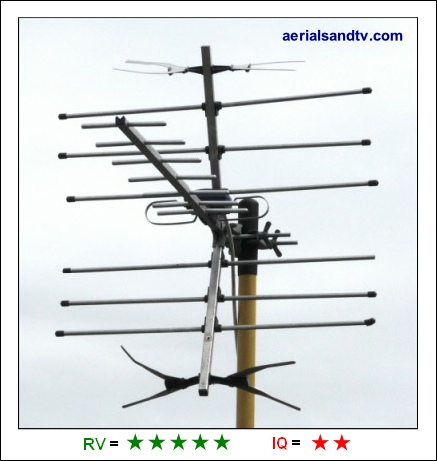 I assume the chap’s used bits off an old aerial to repair a new aerial. I can assure you 100% that those replacement reflector elements are doing precisely eff all, apart from provoking mirth from those who know about aerials.
Memo to the world :
Not all aerial bits are the same.
One more thing about this : Bodger's Luck strikes again.
Although the reflectors' erroneous elements are contributing nothing but unnecessary extra wind load, the aerial will probably be working fine.
How thoroughly irritating......
This aerial was seen on a canal boat, so the guy gets a bonus IQ star because it’s the wrong type of aerial for a boat, or a caravan come to that, get a Log, preferably, a DM Log.

You've only got to look at all the others : Unfolded Speedbird 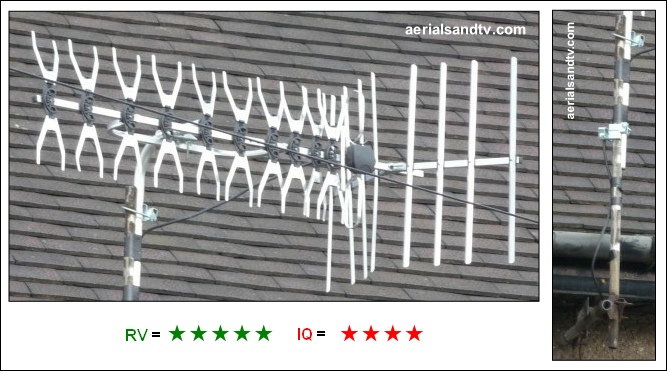 Unfolded directors (i.e. directors which haven’t been unfolded and are as packed in the box) are not actually that uncommon. The “Speedbird” reflector isn’t that uncommon either, though neither errors are sufficiently widespread that simple research, like looking at other aerials around you, wouldn’t educate the errant installer that he may be doing something wrong.......
BUT, unfolded directors plus a Speedbird reflector, well that’s a rarity indeed.
This installation gets bonus IQ stars for the mast. What the hell is that ?
What he saved in not buying a new pole he must have spent in extra clamps,which aren’t even the right ones for the job, they’re just aerial clamps ! ? !
Who would want that on the front of their house ? That’s the question.
This install is another perfect example of Bodgers being bleedin’ lucky, because I reckon there’s a good chance this Bacofoil aerial is probably working OK. The site (Staveley) is actually in a reasonable signal area and “Speedbird “ reflectors don’t actually knock that much off the signal.
Bodgers luck also extends to the fact that an aerial with unfolded director elements will also work, to a certain extent anyway. When I tested one it lost between 1dB and 5dB (the loss varied with the frequency).
One last thought, if this aerial was horizontally polarised (as most are) it’d look just like an aeroplane, in fact if the wind were in the right direction it may even fly.
Yes fly.
Fly away from this disaster area, no longer will people laugh at you.
You’re not a duckling, you’re a swan *.

You've only got to look at all the others : Where to start with this one...... 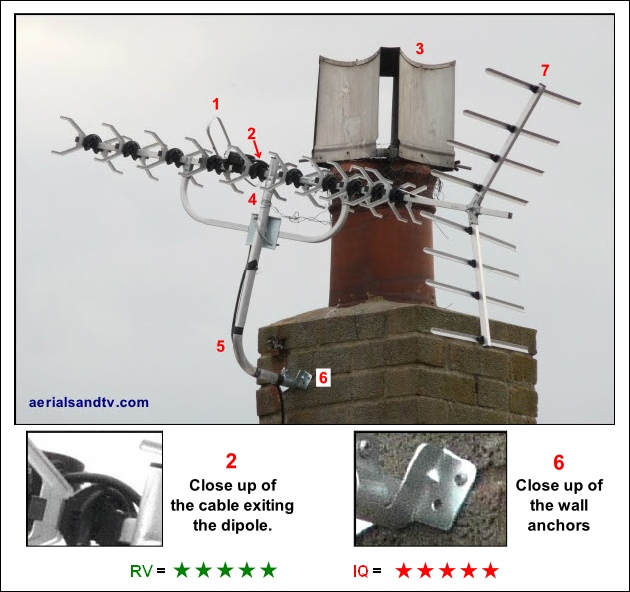 Hurrah !
Yes, I can present our first double 5 star install ! !

How many mistakes can you spot in this aerial installation ?
Without even counting the fact he’s used a Bendy Bacofoil aerial (aka an Argos/Screwfix special) I’ve found seven, but there’s every chance more are there, somewhere…….

1 - The dipole is mounted in the middle of the aerial, this is a rarer bodge than just mounting the dipole behind the reflector. The latter sometimes happens when a brain dead transposes the reflector and dipole in the predrilled holes, thinking he’s too clever to bother reading the instructions, or, indeed, bothering to look at any of the other aerials all about him...... Also note just how bendy the dipole is on this Bacofoil aerial.

2 - The cable is sloping down into the dipole box, thus assisting water to gain its unwelcome entry. Always remember water flows downhill (which is why flat roofs are a crap idea......). Thus whenever a cable enters anything you don’t want water to get into make sure the cable is approaching it in an upwards direction.

3 - The aerial is mounted right next to the chimney, this usually affects its performance. As it happens our brain dead has mounted the dipole in the wrong place so it’s actually in front of the chimney anyway, therefore any fall off in gain would be less likely to occur, such is the genius of ignorance.......
Actually there’s another reason why the aerial should be kept away from the chimney, any fumes coming up the latter may negatively affect the alloy which the antenna is made of.

4 - The loft kit’s pole is mounted through the elements of the aerial. Since the pole is the opposite polarity to the aerial it probably wouldn’t make much difference (which is exasperating to us aerial perfectionists.....), but it’s still an error, and we’re not in a forgiving mood.

5 - That’s a loft kit, for mounting, well where do you think ? (there’s a clue in the name) In actual fact the mounting bracket on the loft kits we sell is significantly stronger than this one, but we’d still only recommend their use (for a TV aerial) in a loft.........

6 - The screws are in the mortar, they should be in the bricks. They’re also too small. And anyway, on a chimney you’re supposed to fit a (yes you’ve got it) a chimney bracket !

In my experience Bodgers are flukey gits, thus, despite this being an absolute disaster of an installation, it really wouldn’t surprise me if he gets a perfect picture, and it lasts for 30 years. [link]

You've only got to look at all the others : Log Periodic with a reflector ? ! ? 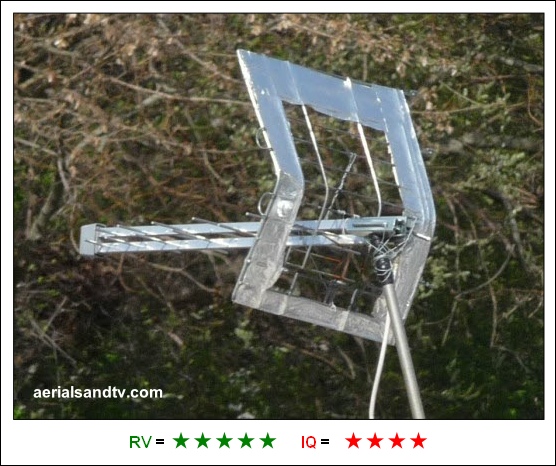 I’ll bet you’ve never seen this before have you ?
A Log Periodic aerial with a reflector !
The ultimate proof that a little knowledge is indeed a dangerous thing.
I can’t imagine the reflector is negatively affecting the signal, but, on the other hand I can’t imagine it’s actually doing any good either.......
This was spotted on a canal boat at Tinsley Marina, he’s chosen the right aerial type - a Log - for a boat though I find those alloy rods sometimes break when you bend them straight, that’s why we only recommend the DM Log (sold here) for touring. BUT, one of the reasons a Log is well suited to boats or caravans is because it’s flat due to not needing a reflector, so fitting one negates one of its major plus points !
That Bacofoil all round the edge of the "reflector" does make it stand out for the photograph, so I’m sure I speak for all of us when I record our thanks to him for adding it.
Finally, and most importantly, how lonely is his grill pan going to be now its all on its ownsome ? 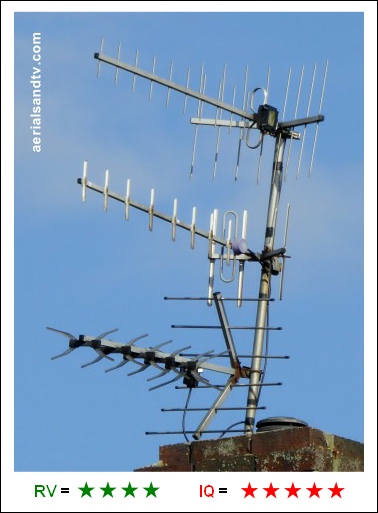 Incorrectly polarised aerials are actually fairly common, and, in fact, if the signal strength is high enough, they may still work fine.
However……..
How dim would you have to be, if you’ve already got two correctly polarised aerials on your pole, to incorrectly polarise the third one ?
Can I please just re-emphasise something ? : “already fitted on the same pole”
So, he wouldn’t have had to look at any of the other aerials around him, just the two aerials that he’s actually having to work around to get the third one onto the mast…..
Or, to put it another way, “you only have to look at the two above”
I considered giving our mate a bonus Idiocy Quotient mark for fitting a third aerial when you don’t even need to, but I remembered that I couldn’t because he’s already got 5/5 anyway, so at least he’s saved that indignity. [link]

You've only got to look at all the others : Getting a DAB on 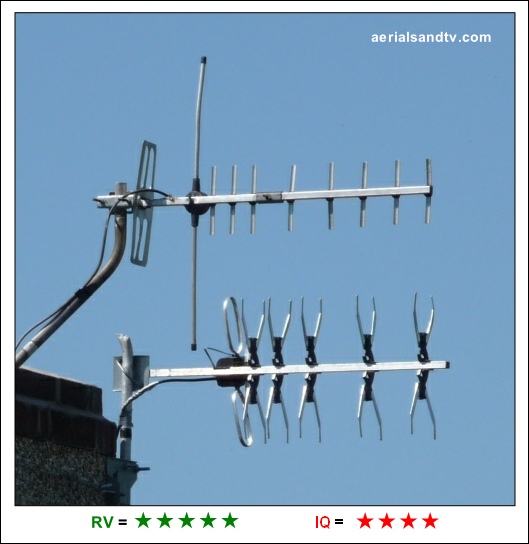 I’ve titled this picture “getting a dab on”, that being a pun, at least “up North”. In these parts “getting a dab on” means working up a sweat. Although in the case of our misguided DIYer he’d have got more TV signal out of this if he had have worked up a (bit more of a) sweat by cutting the dipole down, remember wavelength is inversely proportional to frequency (TV is a higher frequency than DAB therefore the wavelength is shorter, therefore the dipole would be shorter). As it is he’s got a full length DAB half wave open dipole fitted in a TV aerial ? ! ? Why ? That’s the question. In fact another quite pertinent question is : is it a TV aerial or a DAB aerial ? I suspect he’d get the same DAB signal out of it regardless of the TV (UHF) directors and reflector, but I wouldn’t have thought he’d get that much TV (UHF). Having said that, I happen to know he’s not that far from Lancaster transmitter so, most annoyingly, it may well work fine for both DAB and TV……. Yet another case of bodger’s luck. Of course if he’s in an area of signal so strong he gets TV out of (effectively) a DAB aerial, he certainly doesn’t need two aerials on his house does he ? ! ?

Bonus marks for the fact that DAB/TV aerial was originally a Contract type, and, in fact, an extra crap Contract type in that it’s only a 10 element yet still employs a boom coupler. In addition the aerial in the background is a Bacofoil (notice the fact the reflector has already fallen off and the dipole is bent to buggary), oh yes, and he’s bodged the cable join (see how to join cables outdoors). No self amalgamating tape for our mate….. . Lastly, he certainly likes 1 inch diameter poles doesn’t he ? Careful examination of the picture will reveal where the pole has already failed and he’s just moved the Bacofoil aerial down a bit !