These tests were undertaken when analogue was still about, but that does NOT make them less valid, if anything the reverse is the case.....

Although analogue is no longer available it actually makes a better test of aerial performance because of the "all or nothing" way in which a digital picture degrades. 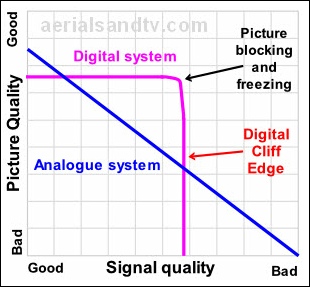 If you`ve clicked through to this article from another section of the website, read the short article (at the top of this page) about the fact aerials testing (without a meter) is more effectively done with analogue signals but is still more than relevant.

The big problem with a directional aerial over an Omni is it usually requires quite a bit more effort to get a TV picture. The thing is that the end result is nearly always better, as with so much of life, minimum effort = minimum result (and minimum satisfaction......).
So how much difference was there between the Omni aerial and the DM Log ?

I compared the signals on analogue and digital at two different locations and at different times of the day, on all tests the Log outperformed the Omni, as expected.
Below is typical result for a reasonable signal area on analogue transmissions, this was off Moel Y Parc transmitter. Further down is a test in a poor signal area.

Note that to a TV engineer there is no such thing as a perfect picture.

It must be admitted that to get such good (analogue) pictures off an aerial [any aerial....] mounted on the roof of a canal boat, it must have been a pretty good signal area. I wouldn’t expect this to be the case at most sites. However this throws into sharp focus how poor the Omni was, by producing such a poor ITV. I was actually quite surprised and had to keep swapping between the two aerials to confirm that this was in fact the case.
A more rigorous test was on the digital channels in the morning mist. The DM Log picked up all the Freeview programmes (that I could be bothered to check) with no problems, though it must be admitted that all digital channels can block / freeze sporadically, no matter how good the signal. That’s due to skimping (by the broadcasters) on the error correction data, i.e. trying to cram too many channels into the available bandwidth.
But the Omni failed to pick up half of the digital channels or was blocking in an annoying fashion, I wouldn’t have put up with it had I actually wanted to watch the programme... That said, it performed significantly better than this the previous night in the different weather conditions prevailing at the time. Then it was picking up most (but not all) of the channels OK, though the signal levels / quality were about 40% lower than with the Log, not that I would trust the signal level readings on TVs (or £30 meters for that matter)…….

We also spent a night moored up at the foot of the Bosley locks and I automatically went onto Winter Hill transmitter (to the NNW) as every one else was on it !
I subsequently discovered (see bottom of this section) that Moel Y Parc transmitter (to the West) produced better results, but some examples of the pictures off Winter Hill are shown below to illustrate what one can expect to receive in a poor signal area. 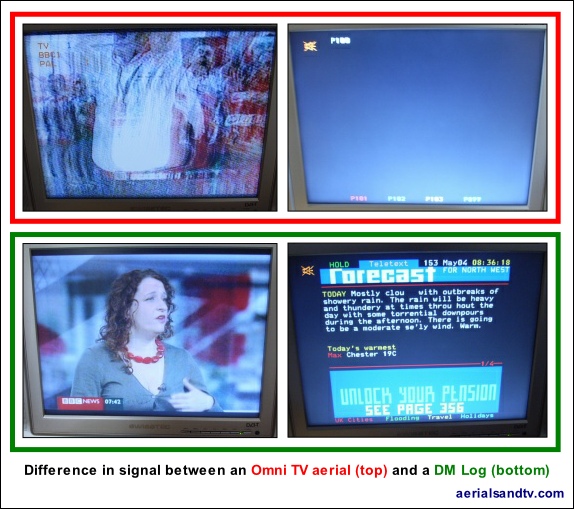 Top row in the picture, via an Omni, we have BBC1 on the left and the text off ITV on the right.
Bottom row, but via a DM Log, we have the same.

Note : neither analogue or Teletext is transmitted anymore, but for the purposes of aerial testing it is actually a superior indication of degrading signal quality than digital.
The BBC1 picture off the DM Log is not as good as it looks in the photo, it was a bit grainy, but it was obviously far better than off the Omni. Similarly there are a few glitches on the ITV text, but again, it’s a different ball game to the Omni’s non existent Teletext reception.
The site was the foot of Bosley Locks and the transmitter was Winter Hill.

Here is a section of our transmitter map with Bosley locks, Winter Hill and Moel y Parc. Whilst farting about with an Omni directional aerial it picked up a better signal from Moel, when all the other boats moored there were on Winter Hill ! Thus proving that just because all the other boats (or caravans) are pointing at a particular transmitter, it’s not necessarily the best choice ! You’re better off looking which direction (and polarity) the houses’ aerials are pointing…. 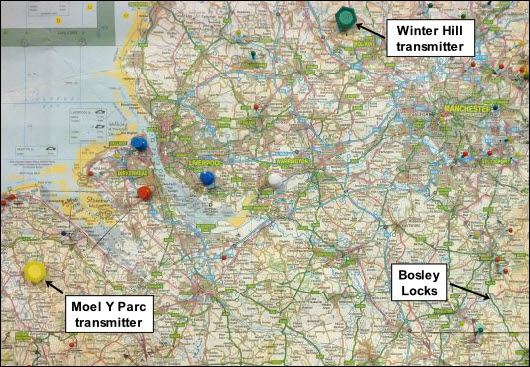 If you`ve clicked through to this article from another section of the website, read the short article (at the top of this page) about the fact aerials testing (without a meter) is more effectively done with analogue signals but is still more than relevant.

In May 2009 we hired a cruiser on the River Great Ouse from Ely, which was more scenic than you’d think by the way, though the locks were busy on the Bank Holiday Monday !

Anyway the boat came with a set top type aerial but a reasonably good one, a small Log Periodic in fact. I took the opportunity to compare it to my DM Log and the results are summarised in the table below. I’ve split the results into CHs 1 to 4 and C5 because the latter was low power and had a restricted radiation pattern at the time, therefore receiving it required a lot more from the aerial. I put the set top on the roof (when comparing them) and it worked reasonably at most sites because, let’s face it, it’s pretty flat and not that far from Sandy transmitter ! In fact when we moored up at St Neots we could see the Sandy, loud and proud on the horizon. Even the set top (including when actually on the set top ! ) gave a very good picture, thus explaining why some people think their Omni aerials are great. It’s all about signal strength, even an Omni inside the boat would have given a good picture there....

More problematic was when we were North of Ely (and in Cambridge) though Stretham was about mid way between the two, signal wise. 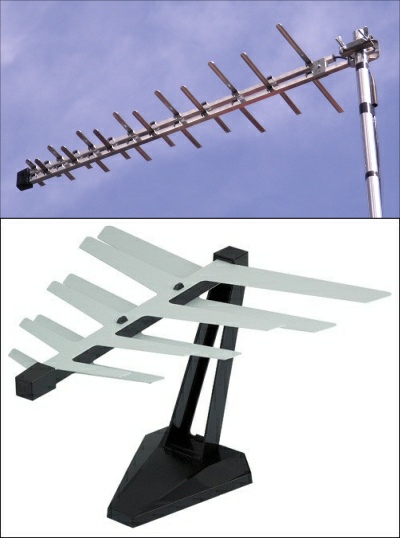