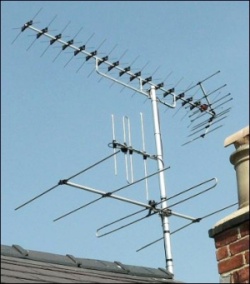 Below is a table with all the (approximate) dimensions of the antennas that we sell.
Note that although 6ft, 7ft or indeed 8ft sounds big, once it’s on your roof it wouldn’t usually look that big !

It should be borne in mind that vertically polarising an aerial will increase its wind loading.

We have given two figures for the length of each aerial, one is that from the first (front) element to the reflector and the other is the overall length of the boom.

The XB10s can be end mounted if required, making them even more suitable for loft installations. However, for an outside install, we would not usually recommend end mounting an aerial of any appreciable size, as it will obviously put more strain/twisting forces on to the pole and its bracket. End mounting aerials can exert a very high torque in a strong wind. If end mounting an aerial (even more so if also using a cranked pole) consideration should be given to using saddles with the V bolts. We recommend all aerials with a wind loading over about 50N (at 80mph) are cradle mounted if possible. End mounted Tri Booms (see test of economy Tri Boom), exert even more force because of their large wind loading, a MUX Magician Tri Boom is around 150N (at 80mph), that’s significantly higher than even a large XB16 so be warned. In fact a Yagi 18K has at least as much gain as a TriBoom and half the windloading (approx 75N) !
Log Periodics should (probably....) be end mounted, but as can be seen from the table their wind loading is relatively low so it isn’t usually a problem.

The wind load figures are our own estimates, though we don’t think they’re that far out.
The dimensions for the reflector(s) are for the whole (double) unit.
Some of these models are no longer available but we have kept the data on here because many are still in use around the country.

Many of these wind load figures (at 80mph / 130kmh) are pretty high but, fortunately, most satellite dishes aren’t mounted on the end of long poles, which greatly increase the force on the bracket and the wall (or chimney) that it’s mounted on. Obviously the angle of the wind onto the dish is very significant, a southerly (i.e. onto the front of the dish) being the worst case though there is a theory that a “side on” wind can make the dish perform as an aerofoil ! Apparently there is no significant difference in wind load between a solid and perforated dish at wind speeds above 50mph due to the turbulence created around each hole.

Some of our customers need to transport the aerials after delivery (particularly to avoid carriage supplements to NW Scotland and Northern Ireland ! ) so below we have a table showing the approximate sizes of the boxes which the aerials come in.
We can shorten the boxes for the XB16s (to 48” /1.2m) and FM3s (to 59"/1.5m) if necessary.