How much risk does lightning pose to your aerial installation ? 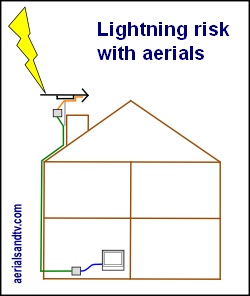 Fairly often we get asked about the lightning risk to your TV, and indeed the rest of your house, of having a TV aerial up on your roof or wall. It's easy to see why people think it's a risk, a metal structure up at height. However, although lightning tends to strike objects that are significantly above average terrain height, TV aerials are usually only a few feet above roof level so the increased risk of a lightning strikes is small. In fact I have to say, during the 15 odd years I was a TV engineer I don't recall seeing one TV which had been struck by lightning down the aerial cable. As a bit of research I phoned half a dozen of our ex customers (we used to sell TV service manuals till Jul 2010) and asked the engineers how often they'd had lightning damage of that sort. I have to add most were approaching retirement or retired, TV repair is a dying trade (hopefully not the engineers, not quite yet anyway….), so between them there was a hell of a lot of knowledge, probably over 200 years in fact! Most of them reflected my own experience and apart from the odd one they couldn't remember ever having repaired a TV which had suffered a lightning strike down its aerial cable. Now the more observant of you will have noticed I've italicised the phrase down its aerial cable. This is because, although it's vary rare for lightning to hit your aerial, it's rather more common for equipment to get damaged by a surge up the mains (or cable connection or phone line) from a nearby strike. All the engineers I spoke to had had fairly regular (not exactly common, but it's not unusual) repairs involving TVs and the like with damaged power supplies etc from lightning induced mains surges.
If you think about it the risk of a direct lightning strike must be pretty low because lamp posts are earthed conductive structures and are nearly as tall as the average house. If they were at major risk the bleedin' things would be getting blown up every time there's a thunderstorm, but they don't, they seem to last for ever. Or at least until they get hit by a careering vehicle.

Lightning discharges are normally in the range 20KA to 200KA. To a thunderstorm a residential area is seen as a partially elevated ground plane due to the cumulative effect of all the earthed metalwork in the structures. Lightning will take the the shortest, least resistive and least reactive path to ground. Incidentally a lightning conductors route to earth should be as straight as possible because every change of direction adds inductance. Now a house, and even more so a number of houses, have many parallel paths of low but more or less equal height, often with changes of direction and relatively high resistance. In addition they often have poor electrical earths. All of this results in higher localised voltage gradients and when combined with the small spacing between the paths to earth this means that the main lightning discharge will readily branch out to nearby conductors if it meets an increase in resistance/impedance. Also bear in mind that lightning will preferentially strike the ground if the distance between the structures is twice their height.
If your aerial is significantly higher than your roof (over 3m? ) and your house is significantly above average terrain height it may be worth running an earth tape from the mast down the side of the building to an earth rod, with due regard to PME safety issues (PME = Protective Multiple Earthing). There is some useful advice on that in this Satcure article. But if your house is significantly above average terrain height it's unlikely you'd need a tall aerial pole anyway (in fact your aerial may well work in the loft) so I can't see this applying to many people!

Anyway, in the unlikely event that lightning does strike a house it usually makes a beeline for the plumbing system (which is usually copper pipe connected directly to earth) not the TV aerial. And the highest part of the plumbing system is usually the copper pipework connected to the cold water tank in the loft, and that is why houses struck by lightning typically have a big hole blown in the roof! An alternative path to earth, much preferred by any lightning discharge to the relatively high resistance TV aerial and cable, would be any stainless flue liner up your chimney.

CONCLUSION : The fact is that the risk of lightning striking your house really is quite remote. More to the point, if your house does actually get struck by lightning it probably won't have been due to the TV aerial being there, and the chances are that half your roof would get blown off anyway, so under those circumstances whether your TV has been damaged really would be the least of your worries…..

1.  Tony from Audio Visual Services (Shepshed) remembered an aerial which had been struck by lightning. The customer had actually disconnected the aerial cable because of the storm and the loose end was in the middle of the room. The lightning struck and the resulting current arced over from the end of the cable to the nearest earth, the central heating radiator. Tony says he'll always remember her floor, it looked like a mole had travelled from the cable to the radiator wrecking the floor in the process. He also speculated that it might have been better if the aerial had been connected to the TV, it might have blown up the TVs PCB but at least it may have saved her floor! I wonder whether the customers house actually got the main “belt” off the lightning, because if it had I'd have thought it'd have blown off part of her roof…..
Bill Wright (of Wright's aerials) reckons to have seen quite a few lightning damaged aerials in his time, but you have to remember he's been installing aerials since John Logie's time* so that'd only have to be one every year or two and you end up a very big number. Actually Bill estimates he's probably seen one lightning damaged aerial every two or three years (this excludes communal aerial systems which, he says, have a higher strike rate). Most other aerial installers, including us, report very few lightning strikes on aerials, some see one every 5 or so years but some don't remember ever seeing a lightning damaged aerial.

* Bill disputes this, he only accepts Lord Reith. Radiocarbon dating has been commissioned to prove it one way or the other.

2. I will always remember repairing a TV which had suffered from a reported lightning strike. The PCB tracks from the mains cable to the switch were all blown off and the fuse had gone. I replaced the fuse and bridged over the tracks then gingerly wound the mains input voltage up on the Variac. Incredibly it came on and ran quite happily!

3. Roger from Electron Radio (Walsall) had an interesting anecdote about a lightning strike on a cable TV street box. The resulting surge of current took out TVs and/or VCRs in about 25 houses all along the road! I suppose one advantage of fibre optic connection is it'd eliminate this (admittedly very slight) risk because current can't travel up glass fibre!

Thanks to Ray Dring and Alwyn Seeds for specialist technical advice in the preparation of this article.