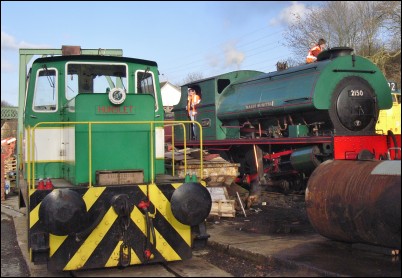 This is a story about "Health & Safety Bollocks" railway style, and ultimately it really is quite sad, in fact it almost brings a tear to my eye.......
I can remember when I was about twelve back in the mid 70s going with the school to the National Railway Museum at York. The NRM is fabulous and it was a great day out but in the afternoon there was an undoubted highlight that actually had quite an effect on the rest of my life. At that time there was a British Railways yard just at the side of the museum and a group of us were sitting watching an engine being worked there. After a short while the driver noticed us sat there and he descended from the cab, walked over to us and asked us if we wanted to go on the footplate! Naturally we all jumped at the chance and followed him up into the loco. It was fantastic as he showed us what everything did and how to start the engine, but it got even better when he asked us if we wanted to drive it! Alright it was only 50 yards or so but it was a wonderful experience for a group of lads, though I’m sure it would be a wonderful experience for most "grown ups" as well!
This incident helped to fire my enthusiasm for all things to do with railways and it had a similar effect on at least one of the other group of us. So why do memories of it make me feel a bit sad? Well it could never happen these days, and so that’s one more experience that the kids of today will never have. I’m sure if it did occur now the railwayman concerned would be sacked on the spot because it’d be considered a serious breach of "Health & Safety". At first sight it may seem to be, but if you think about it that’s bollocks, in fact it’s "Health & Safety Bollocks". You’d almost certainly be in far more danger crossing the bleedin’ road, and yet that is perfectly legal!
On the other hand the "Train Operating Companies" (how romantic that sounds.......) would probably consider it to be a waste of the drivers’ time, and therefore their money.
But that’s bollox as well.
I’ll tell you something, that railwayman knew more about public relations than all these students tumbling out of university with their "Marketing Science" degrees put together. I don’t even want to think how much I’ve spent on train travel etc over the years (most of  which I probably wouldn’t have) had that BR driver not taken time out for a bunch of kids.
That’s it.
Remember every "Health & Safety Bollocks" ruling has a cost somewhere along the line, even if it’s "only" to deny people fabulous experiences that can change their lives......
Still, at least the kids of today have got their "Play Stations", though I’m sure there’s not one of them who would rather play a bleedin’ computer game than actually drive a train, well, not the normal ones anyway.

Actually, blaming Health and Safety (as in the Health and Safety Executive) is probably misguided. It’s the bleedin’ compensation culture, those parasite lawyers and people out to get something for nothing. Oh yes, and companies (and councils) using “Health and Safety” as an excuse to save money by withdrawing services, they're very good at that........

Question : What is the difference between the train on the left (in the above picture) , and the train on the right ?
(Hint, it's not the 1970s “Bay City Rollers” decor)
Answer : The tartan train interior is the original tilting train, the APT, it has a window area per coach of about 19 sq m. The other train is a Virgin Pendolino, its window area is about 10 sq m. One is bigger than the other by around 90% (that's ninety, as in nine zero percent).
Why?
Health and Safety Bollocks that's why!
Apparently the smaller windows make the Pendolino safer.

But the correct response to this is not: “Great, they're safer, I can now sleep more soundly at night”.
The considered response to this (and every Health & Safety edict) should be:
Exactly how much safer does it make me ?
And what am I sacrificing to achieve that ?

How safe do you want to be ? On average you are likely to die every two billion miles of travel on a British train, that's 2,000,000,000 miles. In fact as of 2019 there hadn't been any fatal rail accidents (passenger deaths) in 17 years - that's seventeen years. Smaller windows might improve your chances, maybe to 1 in 2,200,000,000?  People who are sufficiently risk averse to think train travel is significantly dangerous should always sit with their back to the direction of travel because that would make a far bigger difference to their safety than smaller windows. More to the point, assuming they want to be consistent in their risk aversion, they should never drive, in fact they should never go on the roads at all, and they should also live in a bungalow...... 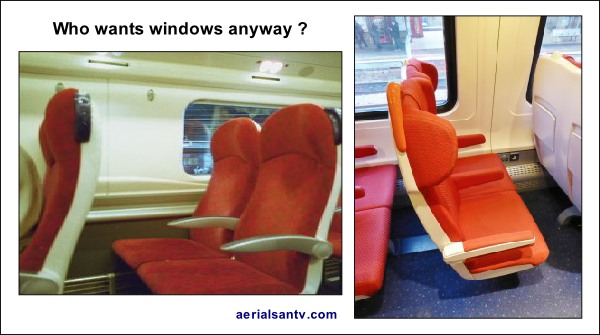 But don't smaller windows also help to prevent people being thrown out of the windows in a crash?
Well, maybe there's something in that argument because I have to say that I do like looking out of train windows at the sylvan British countryside, and it does actually annoy me when the view is obscured by the piles of bodies thrown from all these train windows, so yes, I could possibly go for that one.

On the other hand what are we losing?   A nice light pleasant environment?    Being able to actually see out of a train window?   Dark Satanic Mills are so last century (or the one before), instead we're getting Dark Satanic Trains. That said, we must remember that there are some people who actually like claustrophobic interiors, but, on the other hand, is the percentage of agoraphobics in the population really that significant?

Are we throwing the baby out with the bath water?  Assuming the window is big enough, obviously.

Actually Health & Safety really has gone into a post rational world. From 2023, even on heritage lines (maximum speed 25mph....) all windows will have to be lockable or barred to stop people putting their heads out of them. No more looking out around the coach, or at the steam engine working hard up the grade, one more regulation "to keep us safe". Bollocks to it I say, the numbers killed by sticking their head out of a window on a train must be miniscule, what the 'Effin Hell are they doing ? What are they going to ban next ? I'm only pleased I grew up in the 1970s.....

There is much about  the way the world is going that I'm not that happy about and one of the most worrying trends is that we are getting to the point where unless you are specifically told you can do something it is just assumed you cannot do it. I was bought up in the 70s and then it was the other way around, it was assumed you could do anything (within reason obviously) unless you were specifically told you could not do it......
And I know which I prefer.

How Risky Is It ?

Below is a list which was originally printed in the Royal Statistical Society News (Oct 1998) as part of an article by Frank Duckworth. Frank is one half of the pair who invented the Duckworth Lewis scoring system in cricket. The list is an attempt to quantify risk by giving it a “risk number” equating to the probability of death.

These risk numbers vary by an order of magnitude and therefore are a logarithmic scale (e.g. for a risk number of 4 you would be 10 x more likely to die than a risk number of 3). The figures refer to the UK and are for a lifetime's exposure unless a specific time period is given.

Everyone knows how dangerous cigarettes are but notice how dangerous car travel is, did you know that the single biggest killer of teenage girls is their boyfriend's bad driving......  And I can't help laughing when I think of people who are so very concerned about the safety of their children they don't let them climb trees, and they worry about them when they're off on school trips, then you see them overtaking you whilst breaking the speed limit, with their kids in the back!

Driving is risky but so is the danger from falls. The use of stairs is a dangerous activity. I'm not being facetious about this, they really are risky! Bear in mind that this list is only giving a risk factor for death, if you include the risk of injuries I wouldn't be surprised if use of the stairs actually came top.
Nov 2020 addition : I found an old article in the Daily Telegraph (dated 5 Jan 2013) on a RoSPA report which stated that twice as many people die from "domestic trips" than in car accidents.....
Remember that when you casually trot downstairs carrying something with both arms, and read basic ladder safety......
On the other hand I wonder what would be the chance of death whilst being shown around a railway locomotive as in the tale above?
About the same as an asteroid impact?
That's Health & Safety Bollocks.......

In his article Frank wonders how different our attitude to risk would be if all illness was curable and they could stop the ageing process. To emphasise the point, if we could potentially live for ever, would we still indulge in risky activities?